Review time! I was meant to post this yesterday but I had a family commitment so never got around to it! Stay with Me written by Paul Griffin who is best known for his teen novel The Orange Houses. I did a little background check on Griffin ( aka read up on his Goodreads bio) and he actually trains dogs so that’s cool how it relates to the novel! Thanks to Text Publishing for the review copy! 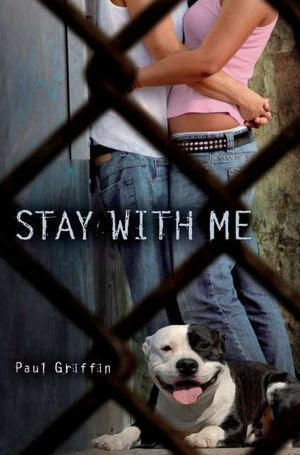 (Goodreads) An urban romance that will capture your soul, break your heart, and restore your faith in the human spirit

Fifteen-year-olds Cece and Mack didn't expect to fall in love. She's a sensitive A student; he's a high school dropout. But soon they're spending every moment together, bonding over a rescued dog, telling their secrets, making plans for the future. Everything is perfect. Until. Until. Mack makes a horrible mistake, and in just a few minutes, the future they'd planned becomes impossible. In this stark new reality, both of them must find meaning and hope in the memories of what they had, to survive when the person they love can't stay.

The Short Story? – A powerful novel about first love, loss and hope. Griffin has written a moving coming-to-age novel that will influence readers of all ages. A bittersweet love story, a mutual heartbreak and the painful process of moving on. Stay with Me is an excellent work of fiction that discusses issues that are faced by teenagers all around the world. Beautiful and heavily influential, Stay with Me is fantastic!

The Long Story? – I didn’t cry but I think that if I didn’t read the ending first I would have. I’m not a fan of coming-to-age novels, sob stories or anything that can be classified as real teen fiction. All of which can be used to describe Stay with Me yet I really enjoyed the novel. It’s the kind of novel that really makes an impact on you and makes you think again how your life could have turned out to be like - makes you appreciate the lifestyle you have. It deals with a lot of serious teen issues like neglect, sex, juvenile behavior and more importantly how to work your way through those issues. Stay with Me was really an excellent balance of romance and the coming-to-age aspects of the novel. Towards the end with all the heartbreak I found it a little hard to read because I’m a huge fan of happy endings and the ending of this novel can only be described as bittersweet. However, overall Stay with Me was a brilliant novel that I’m sure many of you would find very refreshing. It’s a great novel, very powerful.

In Stay with Me, the characterization focuses less on the physical appearance of the characters and more on their emotional state. The novel is written so that the story is told from the perspectives of Cece and Mack, two teens who are in love. The alternating perspectives work really well with the novel because you needed both Cece and Mack’s point of view to get a grasp of the whole story. What really did show through the story was that Cece and Mack had a very close relationship and that they really do love each other. Both characters have their own personal demons and it was a really nice touch to have them help each other through their individual issues. Boo is another character that’s very important because she was the glue that stuck the whole novel together. She played a very important part in the novel in bringing Cece and Mack closer together and she shaped how the novel ended. Overall it’s a very complex characterization however I feel they were necessary in giving the novel personality.

For me when it got the heartbreak and the separation, it was really hard to read. One of the main reasons I don’t like to read real teen fiction is because of the bittersweet endings. It’s realistic but it’s not fiction and it’s not happy. However Stay with Me was definitely a very influential novel with a lot of value. It teaches about love, loss and hope and it’s a great coming-to-age novel. Beautifully written, Griffin has written a bittersweet love story with a deeper and more important message behind it. For fans of Judy Blume and Sarah Dessen.

What's it's Worth? - Squeeze into the Budget/ Hand Over the Paycheck

Email ThisBlogThis!Share to TwitterShare to FacebookShare to Pinterest
Labels: Text