Review Time! Silence is the third book in the internationally best-selling series, Hush Hush by Becca Fitzpatrick which is one of my favourite series ever! Thanks goes to Simon and Schuster Australia for sending me a review copy and a signed/ personalized copy! I will cherish it forever and pepper it with my undivided love :) 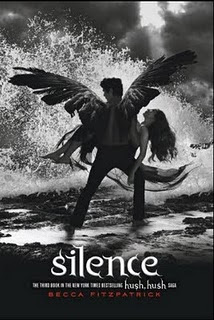 (Goodreads) The noise between Patch and Nora is gone. They've overcome the secrets riddled in Patch's dark past...bridged two irreconcilable worlds...faced heart-wrenching tests of betrayal, loyalty and trust...and all for a love that will transcend the boundary between heaven and earth. Armed with nothing but their absolute faith in one another, Patch and Nora enter a desperate fight to stop a villain who holds the power to shatter everything they've worked for—and their love—forever.

The Short Story? – My favorite book of the series so far, Fitzpatrick has really outdone herself! Our favourite couple Patch and Nora is back for another awesome installment of kick ass action. Heated, fast-paced and filled with romance, Silence does not disappoint all the Hush, Hush fans out there. An excellent addition to a highly acclaimed series, Silence is an unforgettable read that will have you craving for more!

The Long Story? -  I’m so glad I loved Silence because honestly I found Crescendo not up to standard and a little lacking. I was completely blown away by Hush, Hush and when I read Crescendo I thought ‘what did I like about this series again?’ However after reading Silence I can guarantee you that you won’t be disappointed. Hush, Hush was amazing but Silence was phenomenal. The plot picks up from where it ends in Crescendo and it just keeps getting better!  I think one of the things I like about this novel is that Nora and Patch are finally ‘together’. Finally after two books of struggle and differences, they have pushed everything aside to be together. That itself is something worth rejoicing. There are also unexpected development in the war between the fallen and nephilim. As always, Fitzpatrick writes beautifully and the novel flows. An extraordinary novel!

There isn’t much to say about the characters that we don’t already know. After all, to be developing a character three books into a series calls for serious bad writing. All I can say is that I’ve grown to like Nora more. Originally I thought of Nora as a little clingy and whiny, she wasn’t an ideal heroine and reminded me of Bella Swan (who is probably one of my least favorite heroines ever, I enjoyed Twilight but it was poor characterization for a protagonist). However throughout the progress of the series, I’ve grown to like Nora more and in Silence she has proven that she does have a backbone and that she is capable of heroic acts. Patch is just *swoon*. Nuff said. He is the definition of the typical YA ‘bad boy’. Plus he is so badass ;)

Everything in consideration, I can’t think of any reason why you would want to miss this phenomenal novel! Fitzpatrick does not disappoint with the latest installment in her Hush Hush series (WHICH everyone should have read by now!). Beautiful, complex and romantic, Hush Hush is one of the pioneers of YA paranormal romance. Utterly compelling and unforgettable, why not start the New Year with a beautiful tale about a girl and a gorgeous fallen angel?

What’s its Worth? – Hand over the Paycheck/ Break out the Piggy Bank

Email ThisBlogThis!Share to TwitterShare to FacebookShare to Pinterest
Labels: S and S