Day Sixteen - All About Robin Bridges ( The Gathering Storm) 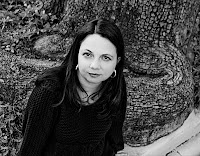 
By day, Robin is a mild-mannered writer of fantasy and paranormal fiction for young adults. By night, she is a pediatric nurse. Robin lives on the Gulf Coast with her husband, one soon-to-be teenager, and two slobbery Mastiffs. She likes playing video games and watching Jane Austen movies. (Alas, if only there were a Jane Austen video game…) THE GATHERING STORM is her first novel.
Dream Debutante Dress - Ohhh vintage and it's such a brilliant red. Great taste, if I ever debut - I would pick a red dress too! ;)


All About Robin Bridges:
1. Robin is not a duchess. (But her grandmother used to call her the Barefoot Contessa when she was younger.)
2. Robin is not Russian, although her great-grandfather did escape from Russia in the back of a hay wagon.
3. Robin cannot read tarot cards, but likes to collect tarot decks anyway.
4. Robin is not a necromancer. (But she does know CPR.)
5. Robin does not speak Russian. (But she learned how to cuss in French from her mother.)
6. Robin thinks it’s creepy when people talk about themselves in third person, but that’s okay because she wrote a book that’s kinda creepy.
7. Robin likes it when people follow her on Twitter or visit her website and Goodreads page.

Bookie's Note: Give it up for the other half of Robin Squared ( which is what I have taken up to call Robin and Robin :P). I'm *really* surprised that you aren't Russian! Which means a whole heap of research must have gone into the writing of The Gathering Storm. *High five* for knowing CPR, maybe one day you can save a life ;) Again, come back tomorrow for the next half of Robin's epic debut! :)