Day Seven - All About Above + Giveaway! 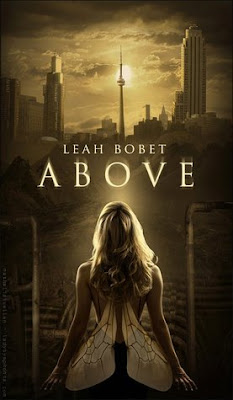 Matthew has loved Ariel from the moment he found her in the tunnels, her bee's wings falling away. They live in Safe, an underground refuge for those fleeing the city Above--like Whisper, who speaks to ghosts, and Jack Flash, who can shoot lightning from his fingers.

But one terrifying night, an old enemy invades Safe with an army of shadows, and only Matthew, Ariel, and a few friends escape Above. As Matthew unravels the mystery of Safe's history and the shadows' attack, he realizes he must find a way to remake his home--not just for himself, but for Ariel, who needs him more than ever before.

The story behind Above's kind of tangled: There were a couple distinct things that rolled together, like a big idea Katamari, into the novel-shaped thing it is today:

The first was an essay in Eli Clare's _Exile and Pride_, which I was reading for a philosophy course: the author having to, as a child, stand in his underwear in an examination room under bright lights, because the doctors were using the diagnosis of his disability to teach student doctors. Something about that passage hit me between the eyes: there was so much shame and display and dehumanization in it.


The second thing was a longstanding problem with how the whole Secret Society of Mutants Living Underground thing is commonly done. They're clannish and suspicious, but nobody ever talks about why that came about or the long-term emotional consequences of being that way. They live underground in sewers or the like, but it's often a really comfortable, all-the-amenities kind of underground, not what you'd get if a half-dozen people with various mental and physical issues went down into the actual sewer and tried to rough out something to live in. After all, it gets cold. You'd need water and power. You'll probably spend most of your time trying to get enough canned food together and making sure you don't get pneumonia, and I bet there's no wifi down there.


The third thing was the right kind of music. There was the emotional seed of something rattling around my head for a while, but it took the right few songs to pull it out and help me figure out why this thing kept wanting to make me burst into tears in public.


The thing that really made it come together, though, was Matthew's voice. He has a very distinct way of speaking -- kind of really young and really lyrical at the same time - and he's a storyteller. This is very much his story, and when I had that voice, that's when I sat down to write.

Leah has kindly offered (1) ONE ARC of Above to one of your lucky people. This giveaway is INTERNATIONAL! Rules of Entry are stated below. I strognly encourage you guys to leave a nice comment thanking Leah!