Miranda Kenneally is the author of CATCHING JORDAN, a contemporary YA novel about football and femininity, coming in December 2011. Other books include PLAYING PARKER (fall 2012) and BAD, BAD THING (spring 2013). Miranda is the co-creator of Dear Teen Me. The Dear Teen Me Anthology will be published by Zest Books (distributed by Houghton Mifflin Harcourt) in late 2012. She enjoys reading and writing young adult literature, and loves Star Trek, music, sports, Mexican food, Twitter, coffee, and her husband. Follow her on Twitter or Facebook.

Dream Debutante Dress - You know, this dress is so Lady Gaga worthy, very futuristic, I LOVE it! 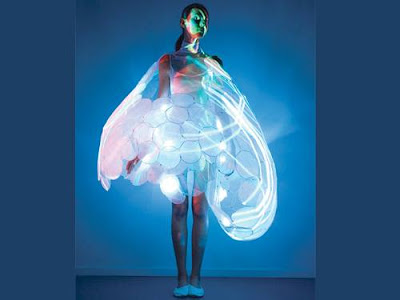 I’ve never actually written this entire story down, so I’m excited to do it here at the Debutante Ball. (Isn’t my dress pretty?!)

I’d say my road to publication started back in fourth grade, when every day during free time at school, I would write a story. Usually the story was about a girl who had like ten golden retrievers and eight brothers and sisters. Also, usually the main character was a twin or a triplet. Sometimes, I got crazy and would have quintuplets.

I loved reading, and I remember my teacher asking me what I wanted to be when I grew up, and I said, “A writer of stories for kids.” And I never really let go of that dream. I went to college where I tried to study literature and creative writing only to realize that the stuff I like about books and writing is not what professors like. I had one creative writing teacher – Glenn Moomau, who encouraged me to write what I know.

I wrote a bunch of crappy poetry in my early twenties. When I turned 27, I told my husband I want to do this, I really want to write novels. He said okay. I sat down and wrote out the first draft of a sci-fi story. I love sci-fi so bad and I thought my love of it would translate to other people loving it too. I shared the story with some friends and everyone really enjoyed it, but my dad told me I needed a lot of work on my mechanics. I polished the story up, and queried some agents. I didn’t get any bites really. I had something like three requests for fulls out of 100 queries.

It took me a while to figure out what the problem was. It wasn’t the story, it was the hook and the audience. Who was this crazy sci-fi story for? It was a mix of Star Trek and Gilmore Girls and The Secret Life of the American Teenager. Also, it straddled the line between Middle Grade and Young Adult, and that doesn’t work for anybody really. Unless you’re JK Rowling, which I am not.

So taking the lessons I learned from Book One, I sat back down and thought up a hook. Girl football player falling in love for the first time. I wrote out the first draft and then revised it a few times. By this point, I was really down on myself because of what happened with my sci-fi novel. No one wanted to read it, even though I found it hilarious and engaging. I sent out a couple of queries, just to test the waters. Both queries got me full requests. I sent the book to the agents, and I went back and did another edit of the full manuscript. I kept editing, editing, editing. While waiting to hear back from the first two agents, I sent out the query fifteen more times. Of the seventeen, I got nine requests for fulls, and within about two weeks, I had an offer to represent me. I ended up getting a few more offers, but decided to go with my dream agent and agency! Sara Megibow at Nelson Literary.

It was all about the hook!

When it came time to submit the book to publishers, we had a lot of interest from editors, but some editors were concerned about relateability. I did some tweaking to make sure my main character came across as strong, nice and funny, and also relateable to teen girls. After a crazy submissions process, my agent accepted an offer from Sourcebooks, and now they are publishing three of my books!
My road to publication was all about trial and error. If something doesn’t work, I tweak until it does work. If you aren’t getting much traction on something you’re working on, try putting it away and think about hooks and why your first piece didn’t work. It made all the difference for me.

Bookie's Note : Oh wow, what a long road to publication. You're know I'm actually trying out my creative juice right now and working on a first draft of my SUPER DUPER SECRET Project and by the sound of things I probably won't have anything published until I'm 42 :) BUT, you got there in the end and we're ALL super excited to read Catching Jordan because everyone like swoon-worthy romance novels right? Come back tomorrow for the second half of Jordan's feature!