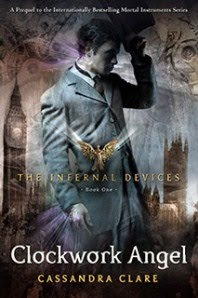 Surfing the net today I found the cover of the long waited Clockwork Angel ! The first book in the prequel by Cassandra Clare. I thought I might share my excitement with you by posting the image of the cover which btw looks amazingggggggg! Ciao!

First. Post. Ever. To start it off I think i'm going to name the Top Ten Books/ Series' I think are worth mentioning of 2009. Soooooo here goes-

This is my list of Top 10 YA Books/Series of 2009. Many of them had very engaging storylines and interesting twists but I have to say my fave by far was The Mortal Instruments Trilogy By Cassandra Clare good mix of romance and urban fantasy. Loved the characters and i was almost sorry when i read the last book ;) However.... the good news is that a FOURTH ( thats right you heard it) book coming out next year called The City of Fallen Angels. On a side note. Later this year Cassandra Clare's prequel to the Mortal Instruments is Coming Out. Make sure you check out 'The Clockwork Angel'!