Daughter of Smoke and Bone

Review Time! Daughter of Smoke and Bone by Laini Taylor was one of the most talked about books in the YA blogosphere. I’m a little disappointed that I didn’t get around to reading the novel until the last few weeks of 2011 but nevertheless, it’s been read! Thanks to Hachette for the review copy! 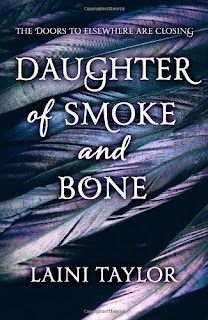 (Goodreads) Around the world, black handprints are appearing on doorways, scorched there by winged strangers who have crept through a slit in the sky.

In a dark and dusty shop, a devil's supply of human teeth grown dangerously low.

And in the tangled lanes of Prague, a young art student is about to be caught up in a brutal otherwordly war.

Meet Karou. She fills her sketchbooks with monsters that may or may not be real; she's prone to disappearing on mysterious "errands"; she speaks many languages--not all of them human; and her bright blue hair actually grows out of her head that color. Who is she? That is the question that haunts her, and she's about to find out.

When one of the strangers--beautiful, haunted Akiva--fixes his fire-colored eyes on her in an alley in Marrakesh, the result is blood and starlight, secrets unveiled, and a star-crossed love whose roots drink deep of a violent past. But will Karou live to regret learning the truth about herself?

The Short Story? – Breathtakingly amazing. It’s hard to explain but the quality of the writing in this novel is just phenomenal. Taylor isn’t just an author, she’s an artist. Her words paint the most vivid of pictures and the story just flows. Beautiful prose to match a wonderfully shaped plot filled with adventure, history and romance. Daughter of Smoke and Bone is an extraordinary tale that will linger long after the last word.

The Long Story? – More than anything, Taylor’s writing is just pure bliss. I’ve never read any book like Daughter of Smoke and Bone and lots of authors are great story-tellers. Their words flow and it’s comfortable to read and it’s enjoyable but none write like Taylor. She’s an artist, throughout the book, my mind is just eclipsed by these vivid scenes and it’s almost like a movie – but better. It’s a very complex and beautifully shaped plot, there is history and obviously some thought have been put into the detail of the setting. I liked the plot but I thought it was overshadowed by the spectacular writing. The first half of the book was unputdownable. The plot was amazing, I loved the exotic setting and the wonderful characterization, everything was going well and then you get to the second half it’s a massive collection of flashbacks and that was a little bit of a disappointment. The flashbacks were critical in understanding the novel but I just thought it should have been written more in the present than the past. Nevertheless, it was certainly a pleasant surprise and the hype was well-deserved.

Along the amazing writing, the characterization was also very well done. I liked how the characters were developed as they came along. I don’t like it when authors develop their characters throughout the novel. You have a character, you develop it on the spot – you don’t introduce then and then 100 pages later say ‘and she has blonde hair and a quick-temper’.  I liked Karou from the very first word, I felt that I could connect with her and that her personality was likable. She’s strong and she can take care of herself and that’s what a heroine is. Akiva our lovely angel/love attraction is the strong and silent type and he gives off the impression that he is very ‘men’. He’s very good-looking, he seems intelligent and obviously capable of emotions. I curious to find how Karou and Akiva’s romance develops in the sequel.

In the end I don’t think anyone should e disheartened by my ‘little bit’ of a disappointment in the plot to not read the book because it’s definitely one of the most memorable of 2011 YA releases. Also, the writing is just to die for so if not for anything else you have to experience the wonderful words of Laini Taylor. Also wonderful characterization and a very unique setting. An exotic creation of a parallel universe and a romance that’s worthy of a second read! I look forward to the sequel!

What’s its Worth? – Hand Over the Paycheck/ Break out the Piggy Bank