Day Six - All About Leah Bobet ( Above) 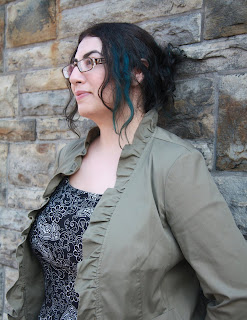 Leah Bobet buys her music on vinyl, wears feathers in her hair, and plants gardens in back alleys. She lives in Toronto, in the same neighbourhood as Scott Pilgrim and Ramona Flowers, and loves it fiercely.

Dream Debutante Dress - It's the end of August while I'm putting this together, so my head's in early fall. That means this is totally inappropriate for the weather at publication, but it's a great Debutante Dress for today. I even have the perfect shoes for it! 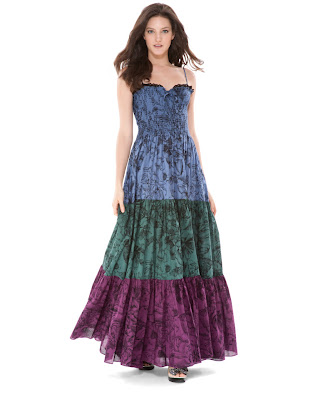 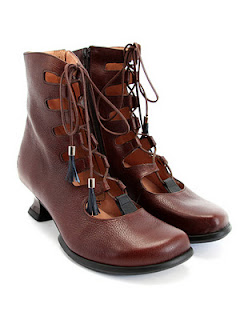 Hi, everyone! I'm really excited to be a 2012 Badass Bookie Debutante: it's an amazing list of books by some seriously fun and amazing people.

I'm also terrible at talking about myself in certain ways, so in the spirit of the season, here's the Twelve Days of Loosely Linked Useless Facts! Except compressed into one day. Y'know, for your convenience.


12) I had an awful time picking out a dress for this. I kept thinking about which waistlines look best on me, and colours, and what I'd do with my hair. About two hours later, I finally told myself, _Leah, shut up. It's an IMAGINARY DRESS._


Ironically, I never used to care about fashion at all. And then I finished my degree and had to buy this whole new wardrobe for job interviews, which meant I had to stop wearing the same three pairs of jeans I'd had for years and start thinking in terms of appearances: what looked professional and what didn't. And I haven't been able to turn that part of my head off since. And it got kind of _fun_. And now I am one of those girls who buys shoes. Go figure.


11) I wrote incessantly when I was a little kid – stopped in high school for some silly reason, and then made a serious go of it (and started publishing short stories) at 19. My mother still has stories I wrote in crayon when I was three years old, folded in quarters to look like books. The scary thing is that when I went back to look at them, I could see my stylistic habits all over the place. Apparently I've always liked "quite" and present tense. This is quite sincerely a creepy thing to discover.


10) What I actually wanted to be in high school was an opera singer: I sang in choirs and musicals all through school, competed locally and in the US, and wrote boxes of music. In my last year of high school I was cut from an adult performance choir and it shook my confidence so badly I didn't sing for years if I thought someone else might hear me. Sometimes I think all that built-up music just shoved in another direction and fell into my words, because the sound of a sentence, the rhythm of it is so ridiculously important to me. Sometimes I don't even care if it makes sense: as long as it makes sense to the _ear_.


(This is also when I started writing again.)


I still love music madly. I still make up little songs, and I'm sort of a professional indie scene fan: I go to piles of concerts, buy EPs from tiny little local bands, and build playlists for everything (novels, my iPod, cleaning my bathroom...). It's kind of nice, in some ways, to have something you love so passionately that you're not expected to contribute to, or compete in, or be good at anymore. There's terrific joy in just being a fan.


9) Up until a few years ago, I was pretty much the shy, reserved, cautious bookworm girl, and always a little sad that I'd spend my life writing about wild adventures and magic and mayhem and never actually _having_ any.


So, y'know, I stopped. Not having adventures, that is. I dyed my hair deep blue and suddenly felt like I had permission to do all the crazy stuff a blue-haired girl can do.


Now I have a lot of good adventures.


8) I have a very strange sense of humour. This is my mother's fault: she is an engineer and has, well, an engineer's sense of humour. When I was very small, we used to take out my Fisher-Price Main Street playset, the one with two levels of street and a manhole up top that opened down into the fire station storefront, and we'd walk the Little People down the street until they fell into the manhole. Then we'd laugh until we cried, because they were so surprised and never saw it coming. Oh no! Open manhole! Eek!


It's been 25 years, and this is still the _funniest thing in the world_, and I can't exactly explain why.


7) I have a day job: I copyedit government transcripts, which involves moving commas about in really esoteric ways so you can get across what people mean without actually changing the words. Being a copyeditor has not really helped with the very strange sense of humour. Copyeditors are even worse than engineers.


6) Batman over Superman, dark chocolate over milk chocolate, tea over coffee, and the book is always better than the movie.


5) Eating local, sustainable food (and when possible, organic food) is a big deal for me: I dated a chef for five years, got ridiculously spoiled when it came to cooking, and it never really wore off. There are a lot of ethical reasons why I do this that I won't preach to you about, but here's the fun bit:


The easiest way to eat local is to have a share in community-supported agriculture: basically, giving a farmer or group of farmers a chunk of money upfront, and then getting fresh-grown food from them weekly.


It is like being in your very own season of Iron Chef. Here's a box of fruit and vegetables that you weren't expecting, and now they're in your fridge! How do you combine them to make awesome lunches? What on earth do you do with celeriac anyway? What is that thing over there, even, and how am I going to cook it?


Now it's almost like a video game. One you get to eat.


4) Like a lot of writers, I have a Twitter, but most of what I talk about has nothing to do with writing: it's about Toronto city politics. This just kind of happened. There was an election summer before last, people started live-tweeting the debates, and I just got...sucked...in.


I haven't entirely figured out why my city politics hobby is so exciting and all-devouring. It's kind of a combination of soap opera, wrestling, and taking apart your favourite TV show on TVTropes with everyone else who just watched it: there are weird personalities, picky technical trivia, Big Name Fans, parties, teams, flame wars...


3) Most of the movies I watch are pre-1950s. There's something about the flickering of the light in old black-and-white film that makes it feel actually different; otherworldly.


2) I regularly wish on stars, pennies, and bits of dandelion fluff. It never hurts to ask, after all.


1) I am fairly convinced that magic is out there, in ordinary things; that something like the way flowers open, or light falling through leaves, or two strangers on the subway just grinning at each other is pure and unadulterated magic. And when we think there isn't any, it's just that we aren't looking quite the right way. And this is why I write urban fantasy: there is nothing with more corners and crannies and secrets and surprises to explore than a city.

Bookie's Notes - AND - that's our third debutante! Everyone, please welcome Leah! From today, she's a official debutante! TEAM TEA! Beats coffee, hot chocolate and any other beverage out there! Canadian politic tweets? This is something I would like to see! :) Opera Singer? I don't think I've ever heard of that dream... :) Anyway lovelies, come back tomorrow for the second half of Leah's feature + a giveaway!