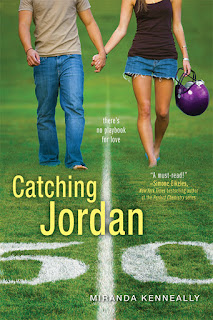 What girl doesn't want to be surrounded by gorgeous jocks day in and day out? Jordan Woods isn't just surrounded by hot guys, though - she leads them as the captain and quarterback on her high school football team. They all see her as one of the guys, and that's just fine. As long as she gets her athletic scholarship to a powerhouse university. But now there's a new guy in town who threatens her starring position on the team... and has her suddenly wishing to be seen as more than just a teammate.


This is a deleted scene from CATCHING JORDAN! Originally this scene took place about a third of the way through the book, and it’s a scene between Jordan and her best friend and favorite wide receiver, Sam Henry.

I turn on my Nintendo Wii. First I play the boxing game, then the tennis game. I love Wii, but man, I’d rather be playing some actual tennis, or hitting a real person in the face.
After turning off the game, I go to our workout room down the hall, put on some boxing gloves and start hitting the bag as hard as I can. First I pretend I’m punching Kristen Markum in the face, then I pretend I’m punching Lacey Wilson in the face, but I’m not getting fired up enough. I’ve gotta get rid of some of this anxiety before my body blows up. So I pretend I’m punching my dad, the great Donovan Woods.
Dancing on my toes, I circle the bag, punching it over and over again. First little jabs, then I lean back and slam a punch across the bow. Sweat is starting to coat my t-shirt and I wipe the sweat off my forehead using my forearm. I do another long sequence of jabs and then a punch. “This is for not believing in me!” I yell at the bag, slamming it so hard I think the chains are going to break. “This is for not caring about my dreams!” I crash my fist into the red padding. “And this is for being such an asshole all the time!” But this time, when I slam my glove into the bag, the bag doesn’t move. It’s like I’m punching a brick wall. “Ow!” I yell, ripping off the glove.
Holding the bag with both hands, Henry pokes his head out from the other side. “I think it’s dead, Woods.”
Nodding, I pull my other glove off and throw it on the floor, then yank my shirt up to wipe the sweat off my face. Henry comes over and gives me a long hug. I don’t even need to tell Henry what’s wrong, to tell him my dad’s an asshole. Henry already knows. I bury my face in his shoulder and wipe the rest of my sweat off using his shirt.
“Gross, man,” he says, releasing me. He pretends to wring out his t-shirt. I laugh and walk out of the gym, back into the basement hangout area. I see that he’s already been scrounging in the kitchen because a glass of lemonade and a bunch of cookies are sitting on the coffee table. Sitting down on the floor, I grab a few cookies and stuff them in my mouth. Henry sits down next to me and I drape my legs across his. He puts a hand on my knee and plays with a hole in my jeans.
“What do you want to do?” I ask.
“Did you forget? We’re doing our fantasy football draft tonight.”
“Oh yeah… some fantasy,” I say, pointing at one of my dad’s many memorabilia shelves. We stare up at one of Dad’s two Heisman trophies. The other is upstairs in the family room. Sometimes, being a girl sucks so bad. I’m almost as good as Mike. If I was a guy, I might be even better. I hate that my dad just ignores the fact I even play football, choosing instead to focus on the future careers of my brother and friends.
And what’s sad? I can tell how much it means to Henry when Dad talks to him about football, and I can’t even be happy for my best friend. I know I should be, because Dad’s comments mean a whole hell of a lot to Henry, whose own dad is never home and never talks to him about his future. Henry’s father probably expects him to become some kind of a bum, working in a factory, or hell, driving a truck, too. Why can’t I be happy for him and encourage him to talk to my father about his future? I need to stop being so selfish.
“Remember the other day? When you were arm wrestling Jake?”
Henry grins, leaning back on his hands. “Yeah, I’ll never forget that.”
“That was cool what my dad said to you.”
“Hmph.” Henry suddenly becomes very interested in the pattern of the carpet.
“I was thinking, maybe, you should talk to him about Michigan. Maybe you could ask Dad to come watch you at one of our games. He might be able to help.”
Henry’s eyes find mine and I think I see a tear, but it must just be the light. “I don’t want his help, Woods... Chinese food?” he asks, pushing my legs off his lap, standing up and going to the desk where we keep all our menus. He shuffles through the papers.
“Awesome.”
“I’ll order it while you go take a shower.”
“I don’t need a shower.”
Henry smiles. “I’m not going to sit here and smell your sweaty ass all night. Now go take a shower before Carter and JJ get here. They don’t want to smell you, either.”
~Giveaway~

I don't know about you but I'm craving to get my hands on a copy of this debut! I'm a huge fan of romance novels and this one is right down my alley. Too bad I can't enter my own giveaway because Miranda has kindly offered TWO (2) copies of Catching Jordan to you lucky people! This giveaway is INTERNATIONAL and please show your support by leaving a comment :) Rules are stated below :)