Hey Guys *waves* how are we all? I decided to continue on with my fav quotes from the Mortal Instruments series since there are so many of them. I just LOVE Cassandra Clare, I mean how can she write so much witty stuff and I can't even figure out a good comeback half the time? Life isn't fair *sigh* Now I'm down again, I going to read some quotes....

"You see, cuckoos are parasites. They lay their eggs in other birds' nests. When the egg hatches, the baby cuckoo pushes the other baby birds out of the nest. The poor parent birds work themselves to death trying to find enough food to feed the enormous cuckoo child who has murdered their babies and taken their places."

"Can I help you with something?'

Clary turned instant traitor against her gender. "Those girls on the otherside of the car are staring at you."
Jace assumed an air of mellow gratification. 'Of course they are,'he said, 'I am stunningly attractive."
— Cassandra Clare (City of Bones)

"Is standing by the window muttering about blood something he does all the time?" asked Simon.
"No," Jace said. "Sometimes he sits on the couch and does it."
— Cassandra Clare (City of Ashes)

"You said you were going for a walk!? What kind of walk takes six hours?"
"A long one?"
— Cassandra Clare (City of Glass)


"You guessed? You must have been pretty sure, considering you could have killed me."
"I was ninety percent sure."
"I see," Clary said. There must have been something in her voice, because he turned to look at her. Her hand cracked across his face, a slap that rocked him back on his heels. He put his hands on his cheek, more in surprise than pain.
"What the hell was that for?"
"The other ten percent."
— Cassandra Clare

"So when the moon's only partly full, you only feel a little wolfy?"

"You could say that."
"Well, you can go ahead and hang your head out the car window if you feel like it."
"I'm a werewolf, not a golden retriever."
— Cassandra Clare

"Investigation?" Isabelle laughed. "Now we're detectives? Maybe we should all have code names."

"Out of the corner of her eye she thought she saw Jace shoot her a look of white rage--but when she glanced at him, he looked as he always did: easy, confident, slightly bored.

In future, Clarissa," he said, "it might be wise to mention that you already have a man in your bed, to avoid such tedious situations."
You invited him into bed?" Simon demanded, looking shaken.
Ridiculous, isn't it?" said Jace. "We would never have all fit."
I didn't invite him into bed," Clary snapped. "We were just kissing."
Just kissing?" Jace's tone mocked her with its false hurt. "How swiftly you dismiss our love."
— Cassandra Clare (City of Bones) 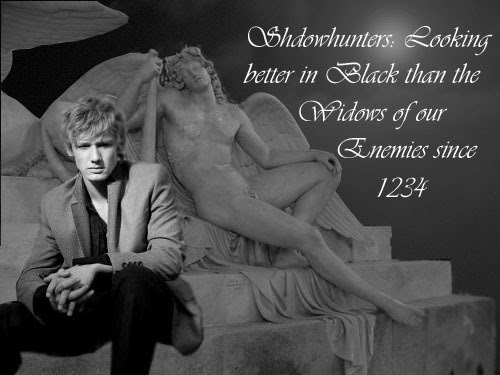 Turn that frown upside down, I love you forever& always Jace Wayland :P
Badass Bookie xx
Posted by Badass Bookie at 12:00 AM

Email ThisBlogThis!Share to TwitterShare to FacebookShare to Pinterest
Labels: Mortal Instruments, Quotes, YA