Hola Amigos! It's in my mailbox time! In My mailbox is a weekly meme start by The Story Siren. We all just share the bookish goodies we got throughout the week basically :P I have been trying to cut down on the books since I have a massive TBR pile so this week I got....

1) Splendor Falls by Rosemary Clement- Moore
I just had to get this one when I saw the pretty purple cover. I am a SUCKER for purple things.Plus it sounds so good. It has the sweetest blurb on the back about a 'mysterious romance' I just had to get it.( the description from goodreads isn't nearly as good). 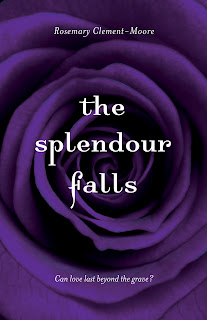 Description- Sylvie Davis is a ballerina who can’t dance. A broken leg ended her career, but Sylvie’s pain runs deeper. What broke her heart was her father’s death, and what’s breaking her spirit is her mother’s remarriage—a union that’s only driven an even deeper wedge into their already tenuous relationship.


Uprooting her from her Manhattan apartment and shipping her to Alabama is her mother’s solution for Sylvie’s unhappiness. Her father’s cousin is restoring a family home in a town rich with her family’s history. And that’s where things start to get shady. As it turns out, her family has a lot more history than Sylvie ever knew. More unnerving, though, are the two guys that she can’t stop thinking about. Shawn Maddox, the resident golden boy, seems to be perfect in every way. But Rhys—a handsome, mysterious foreign guest of her cousin’s—has a hold on her that she doesn’t quite understand. Then she starts seeing things. Sylvie’s lost nearly everything—is she starting to lose her mind as well?

2) Wanted by Sara Shepard
The eighth book of the Pretty Little Liars series. Just a heads up I'm ADDICTED to this series. Designer brands, pretty little liars and the mysterys of Rosewood an excellent way to spend my sunday mornings :P

Description- In Rosewood, majestic estates sprawl for acres, and Tiffany toggle bracelets dangle from every girl's wrist. But not all that glitters is gold, and the town harbors secrets darker than anyone could imagine—like the truth about what really happened the night Alison DiLaurentis went missing. . . . Back in middle school, Ali plucked Emily, Hanna, Aria, and Spencer from obscurity and turned them into the beautiful, popular girls everyone wanted to be. Ali was the best friend they ever had. But she also made them do terrible things and taunted them with their worst secrets. Now, three years later, all their questions about Ali have finally been answered and they can put this awful chapter of their lives behind them. Or so they think.
Not every story has a happy ending, especially when four pretty little liars have done so many wicked things. In the dramatic conclusion of Sara Shepard's bestselling Pretty Little Liars series, Emily, Hanna, Aria, and Spencer could get everything they've ever wanted—unless A has one more horrifying twist in store.


That's all I got this week! What did you get?
Badass Bookie xx