Hello my little poppets! I was abit down today with no apparent reason ( I know pretty pathetic) but it was one of those days. Anyway when I'm down I like to read funny quotes from my favourite books. Some of my favourtie quotes come from  the Mortal Instruments series by Cassandra ( I salute you ! I love you even if you have never met me!!!!!) Anyway I decided to share them with you so they can brighten up you day!

"Have you fallen in love with the wrong person yet?'
Jace said, "Unfortunately, Lady of the Haven, my one true love remains myself."
..."At least," she said, "you don't have to worry about rejection, Jace Wayland."
Not necessarily. I turn myself down occasionally, just to keep it interesting."
— Cassandra Clare (City of Bones)

"I don't want to be a man,' said Jace. 'I want to be an angst-ridden teenager who can't confront his own inner demons and takes it out verbally on other people instead.'
Well,' said Luke, 'you're doing a fantastic job."
— Cassandra Clare (City of Ashes)

Actually, it's just me," said Simon. "Although I've been told the resemblance is startling."
— Cassandra Clare

"We came to see Jace. Is he alright?"
"I don't know," Magnus said. "Does he normally just lie on the floor like that without moving?"
— Cassandra Clare (City of Ashes)

"Not everything is about you," Clary said furiously.

"Possibly," Jace said, "but you do have to admit that the majority of things are."
— Cassandra Clare (City of Glass)

"Do you remember back at the hotel when you promised that if we lived, you’d get dressed up in a nurse’s outfit and give me a sponge bath.

"It was Simon who promised you the sponge bath."
"As soon as I’m back on my feet, handsome."
"I knew we should have left you a rat."
— Cassandra Clare (City of Bones)


"Well, I’m not kissing the mundane,’ said Jace. ‘I’d rather stay down here and rot.’
Forever?’ said Simon. ‘Forever’s an awfully long time.’
Jace raised his eyebrows. ‘I knew it,’ he said. ‘You want to kiss me, don’t you?"
— Cassandra Clare (City of Ashes)

"One of the Silent Brothers is here to see you. Hodge sent me to wake you up. Actually he offered to wake you himself, but since it's 5 a.m., I figured you'd be less cranky if you had something nice to look at. 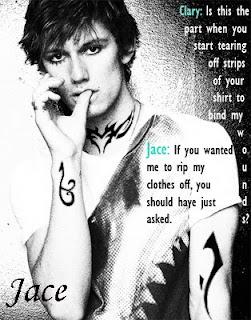