Review Time! Something Like Normal by Trish Doller is a 2012 YA Debut published by Bloomsbury back in June of 2012. I really wanted to read this sooner but reading corresponded with pretty much everything else in my life and I only just had the chance to pick it up lately! You can purchase a copy of the book from Fishpond | The Nile | Booktopia | Bookworld Thanks to Bloomsbury for the review copy! 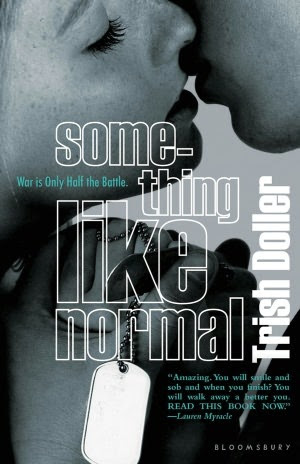 (Goodreads) When Travis returns home from a stint in Afghanistan, his parents are splitting up, his brother’s stolen his girlfriend and his car, and he’s haunted by nightmares of his best friend’s death. It’s not until Travis runs into Harper, a girl he’s had a rocky relationship with since middle school, that life actually starts looking up. And as he and Harper see more of each other, he begins to pick his way through the minefield of family problems and post-traumatic stress to the possibility of a life that might resemble normal again. Travis’s dry sense of humor, and incredible sense of honor, make him an irresistible and eminently lovable hero.


The Short Story? - A bittersweet love story dealing with the aftermath of war, grief, friendship and finding normal again. Doller's debut is a phenomenal novel about love, loss, family and moving on. Realistic characters that are beautifully flawed, this is a cast of characters that will steal your hearts. Deeply moving and well-written, Doller's debut is one of a kind. Definitely a must read for contemporary fiction lovers!

The Long Story? - I knew without even opening the book that this was going to be amazing because THE BOOK IS LESS THAN 300 PAGES ( YAY FOR SHORT BOOKS!) and obviously my presumption that this book was going to be amazing turned out to be correct, for such a small book, it packed quite a punch. Normally I wouldn't be the kind of girl to pick up a book about grief and all that shebang but I have a thing for War novels. I can't even begin to explain how amazing this book is! Something Like Normals follows Travis, a young men who has returned from Afghanistan and is struggling to adjust make to his old life. The world is unravelling around him as he deals with the death of his brother in arms and through his transition he meets a girl who helps him find a new normal. The story is so beautiful and the love story so bittersweet, yet all together it works perfectly. This is definitely a contemporary novel you wouldn't want to miss, one of my 2012 favourites!

One of the things that automatically stood out to me was Travis's voice throughout the novel. It's harsh, there is non of the sugar coating but it's realistic. He tells it like it is. Travis is such a beautifully flawed character and his internal struggle so unique and heartbreaking, I felt an instant connection to him. He definitely isn't a nice guy and in fact some of his action make him a jerk but in the end you just can't help but love him, flaws and all. Harper is perfect for Travis and while there was a point in the novel where I didn't think they should be together, the chemistry between the two is just amazing. More than that, Harper is such a beautiful character, she's so considerate, understanding and just loving. The characterisation is definitely one of the biggest perks of the novel for me, absolutely beautiful characters!

Something Like Normal is an extraordinary love story but more than that it deals with a lot of serious issues in a manner which makes you really think and FEEL. I have nothing but high praise for Doller's debut, Something Like Normal is unlike anything I have read, realistic, bittersweet and heartbreaking. One of my favourites of 2012, this is definitely one to read before the year is up!