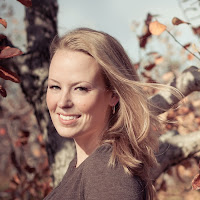 Erin Bowman used to tell stories visually as a web designer. Now a full-time writer, she relies solely on words. Erin lives in New Hampshire with her husband. When not writing she can often be found hiking, geeking out over good typography, and obsessing over all things Harry Potter. TAKEN is her first novel. You can visit her blog (updated occasionally) or find her on twitter (updated obsessively).

Dream Debutante Dress -  This Monique Lhuillier gown Julia Stiles is wearing is gorgeous (colors, silhouette, material), but it also looks ridiculously comfortable. (As someone who spends most of her days writing in yoga pants and a hoodie, comfort is key.) And although the colors are quite different, the ombre effect reminds me of the drastic gradient on TAKEN's cover. I think this makes it my perfect debutante dress. :)

I am a big fan of lists, but only odd-numbered ones. (Even numbers make be twitchy.) So here are 11 random truths about me:

1) I have never died my hair. Ever. Not even a single highlight.

2) As a child, I used to think that my dad took me on errands because my name was Erin. Similarly, when he took my sister Kelsy along, they were going on Kelsys. (This makes perfect sense in the mind of a five year old.)

4) I used to work as a web designer, which is really just another form of story telling, in my opinion. The only difference now is that I obsess over word choice and comma placement instead of colors and fonts.

5) I am a gigantic Harry Potter nerd and proud of it. My favorite of the series is hands down The Prisoner of Azkaban. ("Mischief managed!")

6) The Disney Princesses were my world growing up. And fairy tales in general. (Who am I kidding. This is all still true.)

9) I floss every night. Even on vacation.

10) Without a doubt, some of the best smells in the world are: fresh cut grass, laundry/dryer sheets, pine trees, vanilla, campfires, the spine of a book, and the house I grew up in.

11) I have the greatest job in the world.


Bookie's Note: DENTAL HEALTH FTW! Erin, Disney Princesses are *still* my world. I'm still looking for my own Prince Eric and I plan to lure him with my version of "Part Of Your World" which sounds very much like the original except I have incorporated some dubstep into it (i.e. off key, distorted singing). That's so fascinating that you don't like even numbers, for most people it's the other way around!

Make sure to come back tomorrow for the second half of Erin's feature! We have some juicy secrets lined up and a fantastic giveaway!