Review Time! I received this one for review a few weeks ago from Random House ( big thank-you!), it was published back in 2009 which when I think about it now is a long time ago but really it's a fairly new release. I have heard mixed reviews about it and you're just going to have to read my review to know which side I picked... 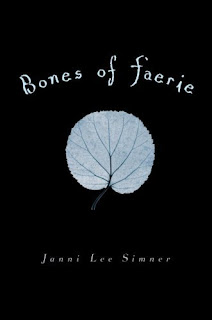 (Goodreads) The war between humanity and Faerie devastated both sides. Or so 15-year-old Liza has been told. Nothing has been seen or heard from Faerie since, and Liza’s world bears the scars of its encounter with magic. Trees move with sinister intention, and the town Liza calls home is surrounded by a forest that threatens to harm all those who wander into it. Then Liza discovers she has the Faerie ability to see—into the past, into the future—and she has no choice but to flee her town. Liza’s quest will take her into Faerie and back again, and what she finds along the way may be the key to healing both worlds.

The Short Story ? - Bones of Faerie is definitely one of the most unusual books I have ever read. I can't say that it lacks originality because it challenged everything I know about faeries! Beautiful writing and an interesting plot, I really did enjoy Bones of Faerie!

The Long Story ? - I admit that when I first started reading the book I wasn't all that keen about it. I even thought it was a little boring. I had no idea why it was called Bones of Faerie because for the first half of the book not one faerie was insight and not to mention this book is set in a old fashioned, middle aged era. No, it wasn't looking in my favor at all, especially since it challenged every thought I had about this book.

Later as I read further, I began to realise that it's actually set in the future not the past. Basically after an all-out war between the humans and faeries, the world slipped into a state of cultural and social backwardness. As I got to understand the plot, the story behind the novel and the characters better, I started to enjoy the book - immensely.

If I had to pick one thing I liked about the book it would be the plot. It's a little bit difficult to follow when you first start the book but as you read on you will realise that it's much more complex than what it appears on the surface. This novel might be called Bones of Faerie but it's more to do with the bones part ( the destruction that was left behind after the war) than the Faeries. Bones of Faerie had a whooping appearance of TWO faeries so although faeries is a significant part of the book it's not that significant.

In my opinion it's more about finding who you are, dealing with problems, find a solution and separating truths from lies. The romance in this novel is almost non-existent ( very subtle hints here and there of a brooding romance) and yet I was able to enjoy it ( I'm a romance junkie at heart). The characters all carried their own little heartaches however small that was caused by the war yet they all team together and show amazing friendship and compassion as they go on their journey to Faerie.

Bones of Faerie is a fairly short novel, only about 240 pages yet it hold a great deal of depth, the plot is great, the characters are briefly described yet I could really connect with them. The writing itself was amazing and despite the rough start, I ended up loving Bones of Faerie. Bottom line - PICK FLOWERS NOT FIGHTS, LOVE NOT WAR, nah kidding. Bottom line - READ THIS BOOK! Rating 4/5