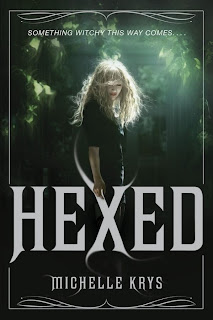 If high school is all about social status, Indigo Blackwood has it made. Sure, her quirky mom owns an occult shop, and a nerd just won’t stop trying to be her friend, but Indie is a popular cheerleader with a football-star boyfriend and a social circle powerful enough to ruin everyone at school. Who wouldn’t want to be her?

Then a guy dies right before her eyes. And the dusty old family Bible her mom is freakishly possessive of is stolen. But it’s when a frustratingly sexy stranger named Bishop enters Indie’s world that she learns her destiny involves a lot more than pom-poms and parties. If she doesn’t get the Bible back, every witch on the planet will die. And that’s seriously bad news for Indie, because according to Bishop, she’s a witch too.

Suddenly forced into a centuries-old war between witches and sorcerers, Indie’s about to uncover the many dark truths about her life—and a future unlike any she ever imagined on top of the cheer pyramid.

· Despite now being a Plotter, I wrote HEXED based solely on a title and a sassy main character. It’s the most fun I’ve ever had writing a book!

· HEXED was originally called THE WITCH HUNTER’S BIBLE, a title that my sister let me steal from her trunked adult historical novel. The title later changed after the book sold to Delacorte Press/Random House Children’s Books. (And actually, it’s a better fit.)

· One night, while working in the NICU, I begged my coworker for help figuring out a plot hole in this book I was writing about witches and sorcerers. She listened to my problem, looked at me very strangely, and then went back to her work, saying she’d think about it. I was sure she’d blown me off, but then she strode up an hour later, all business, and said, ‘This is what you should do.” And solved all my problems. Her idea remains in the book to this day (Love you, Amy!)

· It took about 4 months to write HEXED before it was ready to submit to agents. (I scrambled to finish writing it so that I could enter the 2012 Baker’s Dozen Agent Auction over at Miss Snark’s First Victim. It didn’t get picked.)

· HEXED is set in Los Angeles. I went there for research after my editor made note of a few things that seemed more Texas than L.A. in the book (I’m pleased to report HEXED now has 100% less tailgate parties.)

· I was watching the reality TV show Audrina one day (don’t judge), when I first came across Audrina’s sister’s hot motocross-racer husband, Kyle Loza. I loved his long hair, tattoos, and carefree attitude so much I decided to use him as the mold for the love interest in HEXED. Thus the character of Bishop was born.

· A party scene in HEXED was inspired by the song Last Friday Night by Katy Perry. Another scene was inspired by the song Tonight Tonight by Hot Chelle Rae (“we’re dancing on the edge of the Hollywood sign”). My heart gets fluttery whenever I hear either of them because I vividly remember the time before all this crazy book stuff happened, when getting published was still just an unlikely dream.

· After anyone I know has finished reading HEXED, I get an email going “WHAT?!? YOU DIDN’T” about a certain scene in the book. (Yes, I did.)

· Unlike Indie, I was never a cheerleader, however I did belong to a witchcraft club in the 5th grade, which friends and I formed after watching The Craft. Like most witches, we took out witchcraft books from the library.

· Ever since marathoning Pretty Little Liars, I’ve secretly dreamed of Tyler Blackburn being cast as Bishop in the hypothetical HEXED movie. (Hey, a girl can dream!)

Michelle is giving away a SIGNED ARC of HEXED!