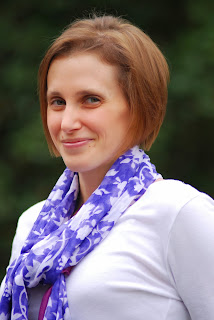 
A native New Yorker, Anne Blankman now lives with her husband and young daughter in southeastern Virginia, where the hot summers haven't killed her yet. She has worked for several years as a youth services librarian. Prisoner of Night and Fog is her first novel. She loves hearing from readers, and you can contact her through her website.

"I'm currently obsessed with 1930s fashion because Prisoner of Night and Fog and its forthcoming sequel take place during the early '30s. I love this dress's rich red color and its simplicity. Who wouldn't feel glamorous whirling around a nightclub in a dress like this?" 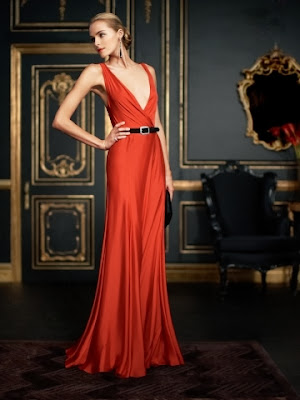 Ten Random Facts About Me:

2. It also means that I'm in love with the Dewey Decimal System. Seriously. I can't help myself. All of the books in our house are shelved alphabetically by the author's last name. It's like a sickness. On the plus side, I can find any book I'm looking for in about two seconds.

3. I used to fence competitively. My weapons were foil and sabre. It wasn't until I got to my first competition that I discovered that almost all sabre fencers are REALLY BIG MEN.

4. I have Celiac Disease, so my body can't handle gluten. It's hard to find a restaurant that can feed me, but I can bake some delicious desserts with crazy-sounding ingredients.

5. I met my husband in our college dining hall.

6. When I was a kid in upstate New York, our next-door neighbors used to have their driveway and entire yard plowed whenever there was a big snowfall. The plow would mound all the snow into a long, enormous wall between our houses. It made an incredible snow fort for me and my brother.

8. When I got the call from my agent that Prisoner of Night and Fog had gone into an auction, I squealed with excitement when I hung up. My three-year-old daughter had no clue what was going on, but she could tell that it was good, and she jumped around the living room, cheering, "Party for Mommy!" Just thinking about it now makes me smile.

9. I rowed on my high school and college varsity crew teams. Every season I tried to switch between port and starboard sides so I wouldn't develop freakishly big muscles on only side of my body. I'm still not sure if it worked.

Bookie's Note: Anne, I always wanted to try fencing because it sounds like the coolest thing ever (it's so badass) but it's really uncommon in Australia and I'm such a klutz, fencing would be a death sentence for me! I'll stick to my team sports for now! What kind of rowing is this? I thought you used both sides of your body (both hands) to row??? Hearing love stories always makes me feel so gooey inside :') Guys, make sure to come back tomorrow for the second half of Anne's feature and her giveaway of PRISONER OF NIGHT AND FOG!