Review Time! This review is way overdue but I'm excited to be finally reviewing it, Crown of Midnight is the eagerly anticipated sequel to Sarah J. Maas' sizzling 2012 YA Debut, Throne of Glass! I absolutely loved the first book so it was without question that Crown of Midnight was one of those few books I did manage to read this year! You can purchase a copy of Crow of Midnight from The Book Depository | Fishpond | The Nile | Bookworld. Thanks to Bloomsbury for the review copy! (Much love SERIOUSLY LOVE YOU GUYS!) 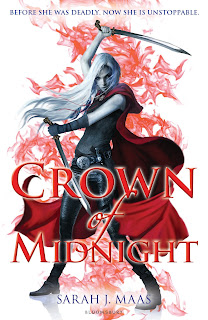 (Goodreads) Eighteen-year-old Celaena Sardothien is bold, daring and beautiful – the perfect seductress and the greatest assassin her world has ever known. But though she won the King’s contest and became his champion, Celaena has been granted neither her liberty nor the freedom to follow her heart. The slavery of the suffocating salt mines of Endovier that scarred her past is nothing compared to a life bound to her darkest enemy, a king whose rule is so dark and evil it is near impossible to defy. Celaena faces a choice that is tearing her heart to pieces: kill in cold blood for a man she hates, or risk sentencing those she loves to death. Celaena must decide what she will fight for: survival, love or the future of a kingdom. Because an assassin cannot have it all . . . And trying to may just destroy her.


The Short Story? - There are not enough words in the english language to describe how amazing this sequel was! I don't know about you but I was expecting the second book flop and instead Maas outwrote herself with this spectacular sequel that absolutely blew my mind to pieces and took me to plot heaven. Seriously - I DIE. This book was one of the best sequels I've ever read, the plot was fast-paced, action-packed and filled with heart-stopping romance and jaw-dropping twists and turns. I fell head over heels in love again with Celaena and Chaol, I'm pretty much living my love story through them. Beautifully written, Maas shows true talent with this pleasing and captivating sequel, Crown of Midnight gets two thumbs up from the Badass Bookie!

The Long Story? - Honestly, this book is amazing beyond words (but perhaps numbers can help. A 4.52 average rating on Goodreads with a total of 9048 ratings - IMPRESSIVE). There is little not to love about the storyline of Crown of Midnight. It was fast-paced and filled with action, suspense and mystery. Basically everything needed to make a good book. I remember reading through this book and finding myself constantly shocked by the unpredictability and unexpected twists in the book. Maas definitely knows how to drop bombs (you emotional terrorist!) in the right places. I can't get through this review without at least talking about the SIZZLING chemistry between Celaena and Chaol, probably one of my favourite couples, the romance between the two has definitely blossomed in this sequel however there are so many obstacles for them to overcome, my heart truly breaks! Beautifully written, I'm 120% pleased with the plot, LOVE LOVE LOVE what Maas has accomplished and I look forward to a third book!

Celaena is one of those characters that I felt an instant connection to from the very first moment we were introduced to each other and over the course of two books I've grown even closer to her. She's just so strong and independent. If I was ever placed in any situation that was similar to what Celaena has gone through, I wouldn't have survived. She's so badass yet there is this sweet side to her which she only shows when she is around Chaol. She's so strong yet vulnerable. I liked how in Crown of Midnight, the story was told in alternating perspectives between Celaena, Chaol and Dorian because it truly brings the reader closer to the character. I found this was especially the case with Chaol, on the outside he is so proper and serious yet after reading his perspective you can totally see that he is a passionate man who truly find himself head over heels in love with Celaena. I couldn't help but feel a little sorry for Dorian because he truly is the other guy in this situation, I'm certain a part of Celaena still loves him but I'm rooting for Chaol along with 98% of the other readers! I couldn't have been happier with the characters!

It seems to me after that raving review that there is not much I didn't like about the book ( or nothing). No wait, I hate the long wait til the THIRD BOOK AFTER THAT ENDING. Maas has truly written an extraordinary sequel that will please many if not all followers of the series, fantastic plot, great characterisation and beautiful writing. A top effort!