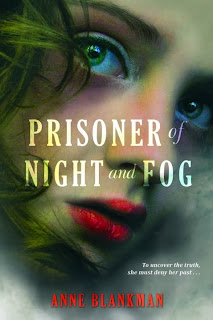 In 1930s Munich, danger lurks behind dark corners, and secrets are buried deep within the city. But Gretchen Müller, who grew up in the National Socialist Party under the wing of her "uncle" Dolf, has been shielded from that side of society ever since her father traded his life for Dolf's, and Gretchen is his favorite, his pet.

Uncle Dolf is none other than Adolf Hitler.

And Gretchen follows his every command.

Until she meets a fearless and handsome young Jewish reporter named Daniel Cohen. Gretchen should despise Daniel, yet she can't stop herself from listening to his story: that her father, the adored Nazi martyr, was actually murdered by an unknown comrade. She also can't help the fierce attraction brewing between them, despite everything she's been taught to believe about Jews.

As Gretchen investigates the very people she's always considered friends, she must decide where her loyalties lie. Will she choose the safety of her former life as a Nazi darling, or will she dare to dig up the truth—even if it could get her and Daniel killed?

I love knowing some of the secrets that go into make a book, so I've decided to share some of mine with you today!

1. I got the idea for this book when I read about Hitler's real-life beloved half niece and couldn't get her out of my head. She's one of the characters in Prisoner of Night and Fog.

2. The working title was Night's Edge.

3. On my desk I have a genuine Nazi paperweight of an eagle emblazoned with a swastika. Seeing it reminds me that many of the people and events I'm writing about are real. The paperweight was confiscated from a German soldier by my husband's grandfather, who fought in the U.S. Army during World War Two.

4. When I started writing Prisoner of Night and Fog, I thought it would be the first in a set of companion pieces. Halfway through the third draft, though, I realized that Gretchen and Daniel's story wasn't over.

Anne is giveaway a Pre-Order of PRISONER OF NIGHT AND FOG!