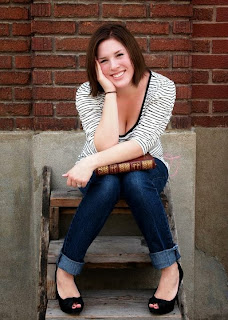 
Bethany Hagen was born and raised in Kansas City. She grew up reading Charlotte Brontë, Jane Austen, and all things King Arthur, and went on to become a librarian. She has a basement full of books and a computer full of writing. She loves drinking coffee and doing karate with her husband (usually not at the same time.) Her debut novel Landry Park will be out from Dial/Penguin in Winter of 2014.

"I LOVE this dress. I found it while I was writing the early drafts of Landry Park, and Madeline actually wears it at the first dance she attends in the novel." 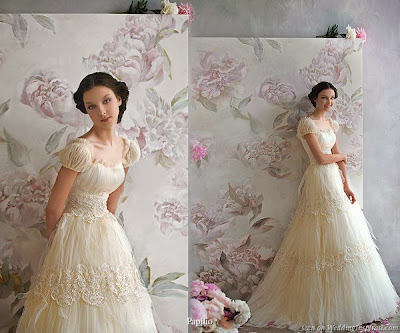 A Series of Un-Connected (and Potentially Strange) Facts About Me:

1. I'm a third degree black belt in kenpo karate. I started doing karate when I was twelve, and the dojo is where I met my husband while we were both teens on the demo team. We just got our third black belt last summer and now we're working towards our fourth. My goal is to one day burst into flower petals like Master Oogway from Kung Fu Panda.

2. I have this thing called narcolepsy. I was diagnosed when I was sixteen, although I exhibited symptoms from a really young age. I consider napping to be one of my passions. I'm a nap connoisseur, if you will.

3. I used to be a 1904 schoolmarm. But mostly only on weekends. I did first person interpretation at a museum for a few years, where I dressed in a long skirt and white shirtwaist and I yelled at children all day. Not a bad gig. The pail lunches got old after a while, though.

4. I'm in an oil painting. In further attempts to pretend that I actually live 100 years ago, I have modeled for a painter. Now, we weren't in a desolate Parisian garret or anything, but it was still pretty special.

6. I probably have toxoplasmosis. Which according to the internet means that I'm more likely to be solitary, take risks and end up with dementia. Still waiting to find the disease that makes me resistant to wearing real pants.

7. I resent wearing pants. I own a magnificent collection of sweatpants. I have maxi skirts for when I have to be extra adult and go to the grocery store and the dentist and stuff.


Bookie's Note: Bethany, #7 is me too. Pants are just so unflattering. When I'm not in pyjama shorts or yoga pants, I'm in a dress or a skirt. I'm not a girly girl - I just HATE PANTS. I've learnt new diseases which I can't pronounce but they don't sound too bad and not going to lie, the first thing that came to mind when you said you had a black belt was ass-kicking in a dark alley way (haha, I hope you never get mugged). Make sure to come back tomorrow for the second half of Bethany's feature when she gives us the INSIDER'S SCOOP on LANDRY PARK (do I even still have to mention there is a giveaway or is that assumed knowledge?).