Review Time! I’ve been very slack this week! I had this awesome Breakfast with the Bookie idea but with two assignments due today, I spent my night finishing them off. Anyway, Passion is the third book in the Fallen series by Lauren Kate, it’s an international bestseller and big thank-you to Random House for sending it! 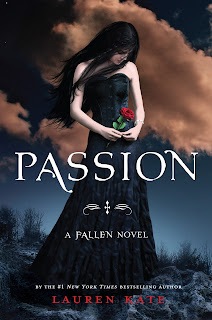 (Goodreads) Luce would die for Daniel.


And she has. Over and over again. Throughout time, Luce and Daniel have found each other, only to be painfully torn apart: Luce dead, Daniel left broken and alone. But perhaps it doesn’t need to be that way. . . .


Luce is certain that something—or someone—in a past life can help her in her present one. So she begins the most important journey of this lifetime . . . going back eternities to witness firsthand her romances with Daniel . . . and finally unlock the key to making their love last.


Cam and the legions of angels and Outcasts are desperate to catch Luce, but none are as frantic as Daniel. He chases Luce through their shared pasts, terrified of what might happen if she rewrites history.


Because their romance for the ages could go up in flames . . . forever

The Short Story? – Passion was a thrilling adventure filled with passionate (no pun intended) moments and delicious romance. Picking up from the cliff hanger ending of Torment, Passion is edgy, dangerous and enticing! Great plot, fantastic romance and another ending that’s leaving me craving for more!

The Long Story? – I didn’t like Fallen very much and I wasn’t planning on reading Torment but the reviews claimed that it was better so I gave this series a second chance. I’m glad I did because I loved Torment and Passion was brilliant. This is a great example of a series that suffers from the FBS (First Book Syndrome), it’s a series that gets better as the story progresses.

I really liked Passion it fitted into the bigger image of Luce and Daniel’s cursed love story yet, I can’t help but think of it as a bridge. It’s a linking book. Passion was the bridge from Torment to Rapture (the next installment), the events that occurred during this book I thought didn’t hold as much significance as the rest of the series. Passion was a collection of flashbacks from Luce and Daniel’s past lives and it was all very interesting, I didn’t know how many different variations of Luce and Daniel you can make. It’s very clever how Kate’s weaved these fictional characters into real events of history. Passion was also kind of a tell-all book, we finally find out why Luce and Daniel are cursed and readers get to see the depth of their love. It’s probably my favourite book in the series, it was more relaxed and I was able to enjoy it at a slower pace and being a romance junkie, this was kind of like bliss.

Characterization was great. It’s the third book in the series and if you’re reading this review, you know what the characters are like. However this is a spoiler-free review so I’ll start from the beginning, Luce our protagonist has definitely matured throughout the duration of this book. I used to think Luce was selfish, immature and I honestly couldn’t see the appeal in her. I liked her a little more in Torment, she grew a backbone but it was in this novel that I really started to connect to her. Daniel is still a pretty foreign character to me, even after spending three installments with him, I’m not quite sure what he’s like, I‘ve got the basics ( he’s in love with Luce, he’s a fallen angel) but his personality is still somewhat of a mystery, he doesn’t show much emotion besides love. Cam, is by far my favourite character, we get to see a new side of him that we’ve never seen before and he’s amazing. Believe me when I say just to see this new side of Cam is a good enough reason the read the book. The other characters played a fairly minor part in Passion. In all, Passion was little about character growth especially with Luce.

As a romance junkie it wouldn’t seem right if I didn’t talk a little about the romance right? The romance was superb as always. I think Passion really depicted the depth of Luce and Daniel’s cursed love story. I can finally understand the “hugeness” of their love for each other and how far they will go to be with each other. Lots of sizzling romance, passionate kisses and heartbreaking moments. It’s one for the romance suckers (like me)

If you haven’t read Fallen I would recommend you to do so and stick with it! I wasn’t the biggest fan of Fallen (okay, I (sorta) hated it) but it drastically gets better! Torment was great and Passion was even better. I can just tell Rapture is going to epic, so do yourself a favor and read this. Great romance, fantastic characters and brilliant plot, Passion is not to be missed!