Gena Showalter’s YA series, Intertwined, about sixteen-year-old Aden Stone, a paranormal magnet who has, well had, four souls trapped in his head, continues this fall with the release of UNRAVELED (Harlequin, September 2010). Now, Aden is down to three souls bossing him around, but along the way he’s picked up the title of Vampire King to add to his ever-growing list of worries (which includes a prophecy that says he’ll bite the dust after a knife through the heart). To celebrate UNRAVELED’s release, Gena and her YA buds are hosting a scavenger hunt on their blogs.


The all-star lineup of hunt participants includes authors Rachel Caine, PC Cast, Marley Gibson, Rosemary Clement-Moore and Tina Ferraro, as well as Gena, natch, and The Knight Agency blog. Three grand prize winners will each win a $100 Visa gift card, plus Gena's giving away signed copies of UNRAVELED to five lucky runner-ups. All you have to do is find all eight letters, unscramble them and email the word to Contests(AT)KnightAgency.net. To find out where the letters are hiding in the great internet universe, click here for a contest road map and rules.


This contest runs from Monday, August 30th to Thursday, September 2nd. All entries must be received by Monday, September 6th at midnight ET. 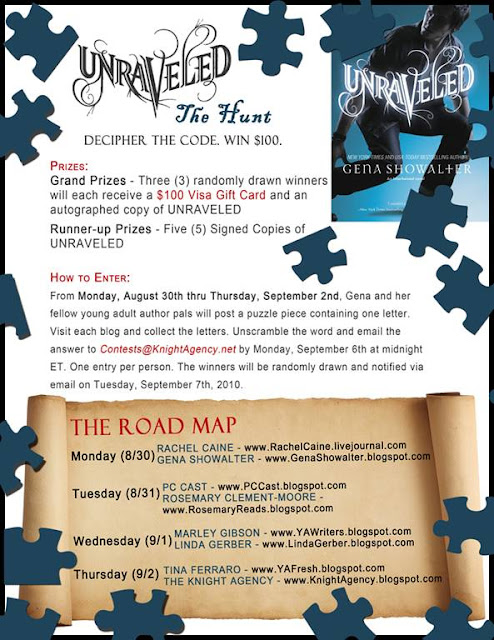