Meagan Spooner grew up reading and writing every spare moment of the day, while dreaming about life as an archaeologist, a marine biologist, an astronaut. She graduated from Hamilton College in New York with a degree in playwriting, and has spent several years since then living in Australia. She's traveled with her family all over the world to places like Egypt, South Africa, the Arctic, Greece, Antarctica, and the Galapagos, and there's a bit of every trip in every story she writes.

She currently lives and writes in Northern Virginia, but the siren call of travel is hard to resist, and there's no telling how long she'll stay there.

In her spare time she plays guitar, plays video games, plays with her cat, and reads.

She is the author of SKYLARK, coming out August 1 from Carolrhoda Lab/Lerner Books. She is also the co-author of THESE BROKEN STARS, forthcoming from Disney-Hyperion in Fall 2013.


Dream Debutante Dress - Meagan, this is such a beautiful dress! :D 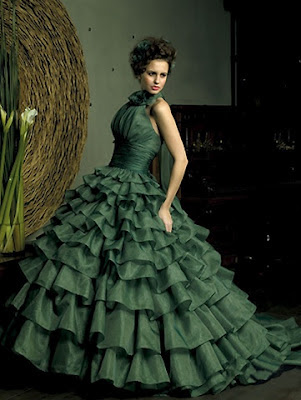 Hi everyone! I’m so psyched to be here. I got all dressed up and everything. It took me about an hour to get my hair like the model’s in the picture above—but I just had to do it, because she looks rather like an understated Effie Trinket, and there’s no way you could possibly go wrong dressing up for your debut with Effie Trinket as your fashion goal.

So! I guess I should tell you a little about myself. But you all read my bio (or you skipped it, because you saw the dress down here and that was far more interesting) so I thought I’d share five things you probably DON’T know about me. Things you’re not gonna find in any official bio.

1. I am six feet tall. One of the most common first things people say to me when they meet me in person is “Holy %@$!, you’re really tall!” Only once have I managed to make a snappy comeback and say, “Oh, thank goodness. I thought it was just that you were unfortunately short, and was trying not to stare!”

2. I can stand on my head indefinitely—or, at least, until the blood pooling there becomes too painful and/or makes me start to pass out.

3. I was once so absorbed in the book I was reading while waiting for a flight at the airport that I not only missed the boarding announcement, I also missed them paging me over the loudspeaker by name for ten minutes before they gave up on me. When I went up to the desk about half an hour later to ask when the flight would be boarding, they just stared at me.

4. I've been to all seven continents, but until recently I hadn’t visited a single national monument in D.C., where I've lived almost my whole life.

5. When I was little, I had a book of bloody, old-school fairy tales complete with bloody, kid-inappropriate illustrations. Whenever I built a fort out of couch cushions, it became my troll cave, and I’d pull the heads off my Barbies so I could adorn the cave entrance with them. I’m hoping I got this idea from the fairy tale book. If not, that’s a little concerning. (Note: No one who has read anything I’ve written will find this particular anecdote at all surprising.)

As you can see I'm participating in Meagan's Blog Tour (Full Schedule HERE)! After some thought, we decided to do a Debut of the Month feature however because Skylark is an AUGUST release, it's not called Debut of the Month ;) Hehe. Anyway Meagan, YOU'RE QUITE THE WORLD TRAVELLER!!! I wish I've been to all 7 continents. So far only two. Three next year I think :P And I've mentioned this already but 6 feet tall - that's pretty tall :D Haha. Anyway, lovely readers please come back tomorrow for the second half of Meagan's feature and a giveaway!