Review Time! Struck by Jennifer Bosworth is a 2012 YA Debut about a girl who's a lightning addict! It's a dystopian and with such a big dystopian market, it's important to stand out and I really thought that  Struck was appealing! You can purchase a copy from The Book Depository | Booktopia | The Nile | Fishpond. Thanks to Random House for the review copy! 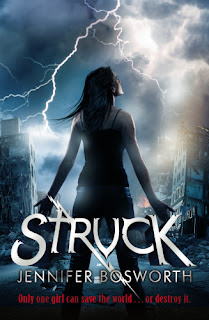 (Goodreads) Mia Price is a lightning addict. She's survived countless strikes, but her craving to connect to the energy in storms endangers her life and the lives of those around her.

Los Angeles, where lightning rarely strikes, is one of the few places Mia feels safe from her addiction. But when an earthquake devastates the city, her haven is transformed into a minefield of chaos and danger. The beaches become massive tent cities. Downtown is a crumbling wasteland, where a traveling party moves to a different empty building each night, the revelers drawn to the destruction by a force they cannot deny. Two warring cults rise to power, and both see Mia as the key to their opposing doomsday prophecies. They believe she has a connection to the freak electrical storm that caused the quake, and to the far more devastating storm that is yet to come.

Mia wants to trust the enigmatic and alluring Jeremy when he promises to protect her, but she fears he isn't who he claims to be. In the end, the passion and power that brought them together could be their downfall. When the final disaster strikes, Mia must risk unleashing the full horror of her strength to save the people she loves, or lose everything.

The Short Story? - Struck really struck ( pun-intended!) me as a well- written dystopian YA! Bosworth's debut has very impressive world-building, careful attention to detail and characters that were both bold and likeable. Beautifully written, Bosworth has a rich narrative voice that shines through our badass protagonist Mia! Wonderful plot, a nice romance tagline and an open ended ending that leaves me craving more! Well done!

The Long Story? - Struck was one of those novels that was extremely detailed. The whole plot only carries out over 4 days yet Bosworth has put some much information and detail into her novel that it's nearly 400 pages long. However this doesn't necessarily mean that it was slow and boring because it definitely wasn't! For me, I liked how jam-packed the book was, it's set over a short period of time yet Bosworth has incorporated so much into it, there's action, romance, suspense, mystery and drama. The plot is also incorporates lot's of religious mythology and futuristic realism into it. As far as a dystopian novel goes, this is definitely one that really shines in the market! Definitely recommending this one to you all!

I thought the characters were very nicely done. Mia was a beautifully flawed character, I liked how Bosworth has given her imperfection to make her more relatable and memorable. Mia is a strong character, I feel she's very down-to-earth, tough and she's got a likeable personality. Some of her decisions aren't the best but she always has good intentions behind her actions. I really liked Jeremy, he wasn't a "typical" love interest. He's attitude and personality is more serious and not the stereotypical possessive or extremely nice and loving personalities of most YA boys. Mia's mum really annoyed me in parts of the novel but I think the frustration was intentional on the author's part to make Mia look more independent. I also thought Parker was a strong character. Definitely a great cast.

Overall, Struck was an enjoyable and well-written debut. Bosworth has created a very realistic dystopian society that is both raw and beautiful. I think I would have liked Bosworth take more risks with her plot maybe kill off a character but as it is, I was very happy with it! With great characters, a wonderful plot and a fantastic love story, Struck is definitely one impressive read!