Review Time! I'm been in the worst reading slump lately and no matter how much I *try* to read, I can't! I think I've developed ADD and some form of dyslexia that prevents me from reading :( Anyway, Deadly Hemlock by Kathleen Peacock is a 2012 YA Debut that I was SUPER excited to read!!! Thank-you Simon and Schuster for the review copy :) 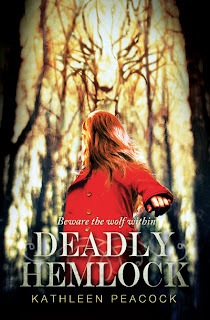 (Goodreads) Mackenzie and Amy were best friends. Until Amy was brutally murdered.
Since then, Mac’s life has been turned upside down. She is being haunted by Amy in her dreams, and an extremist group called the Trackers has come to Mac’s hometown of Hemlock to hunt down Amy’s killer: A white werewolf.

Lupine syndrome—also known as the werewolf virus—is on the rise across the country. Many of the infected try to hide their symptoms, but bloodlust is not easy to control.

Wanting desperately to put an end to her nightmares, Mac decides to investigate Amy’s murder herself. She discovers secrets lurking in the shadows of Hemlock, secrets about Amy’s boyfriend, Jason, her good pal Kyle, and especially her late best friend. Mac is thrown into a maelstrom of violence and betrayal that puts her life at risk.

The Short Story? - Peacock is bring the wolf pack back into DA HOOD! Jumpstarting the slowly dying YA paranormal genre, Deadly Hemlock is HANDS DOWN one of my favourite werewolf reads of all time! With a great cast of characters, a unique plot with the right mix of mystery, action and romance and a fantastic and refreshing narrative voice, Deadly Hemlock is a remarkable debut that had me hooked from cover to cover! Fans of the supernatural? Grab a copy of Deadly Hemlock!

The Long Story? - In this dark age where I haven't been able to get into any book, Deadly Hemlock called out to me. I finished it in less than a day which is a record for me - that's just how good it was! With a killer plot ( pun intended) and Peacock's refreshingly comfortable and unique narrative voice, I absolutely devoured this book. It's no secret that I love a little bit of mystery and romance in my novels, throw in a murder or two and I'm SOLD. Deadly Hemlock had the perfect combination mystery, romance, action and drama. It's such a complex plot that explaining it in this review does it no justice! The only word that I can think to describe it is beautiful. Deadly Hemlock is a beautifully haunting debut that really sells the YA PNR genre, I can't wait to read the sequel!

The characterisation was great. I absolutely loved Mac, honestly one of my favourite protagonists. She's down-to-earth, level headed and more importantly she always sees the good in people and it's not like she's a damsel in distress either. She's tough but she also knows what her limits. She's not trying to play hero, she's just trying to work past the death of Sarah. Kyle was a great love interest, I thought he was  very good boyfriend material and I really liked he's protective personality. He obviously really loves Mac. However Jason was the real scene-stealer. There was this bad-boy, tortured quality about him that just CALLED out to me. Definitely a neat cast of main characters!

In a nutshell, I really don't know how I can get you all to read this book without sounding like a complete psychopath. Hopefully I sold you because this is definitely one debut that stood out from the rest! Refreshing,  I very much enjoyed the fact that the romance was the focus of the novel, THERE WAS A BIGGER PICTURE. Deadly Hemlock completely blew me away with it's beautiful narration, complex plot and amazing characters! Two thumbs up! :)