Review Time! Wolfsbane is the sequel to Nightshade by Andrea Cremer. I'm still a little upset they got rid of the pretty covers but what is done is done right? The cover that's shown in this review is the UK/AUS cover which is not too bad  but seriously the old covers were so much more catchy! Anyway, thanks to Hachette for sending me a review copy! 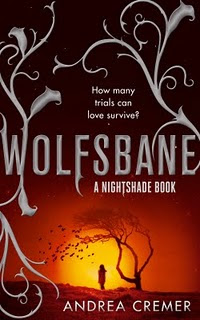 (Goodreads) Calla Tor wakes up in the lair of the Searchers, her sworn enemy, and she's certain her days are numbered.

But then the Searchers make her an offer,one that gives her the chance to destroy her former masters and save the pack and the man she left behind. Is Ren worth the price of her freedom? And will Shay stand by her side no matter what? Now in control of her own destiny, Calla must decide which battles are worth fighting and how many trials true love can endure and still survive.

The Short Story? - The highly anticipated sequel to Nightshade does not disappoint! Fast-paced and packed with action and romance, Wolfsbane is bound to sate your craving for words! Truths unfold, lies resurface and the ultimate decision between love and loyalty. A captivating novel filled drama and tension, Cremer has written yet another masterpiece that will leave you craving for more!

The Long Story? - The plot was stuffed to the brim with action, romance and drama. Wolfsbane picks up from where Nightshade ended, therefore the start was a little confusing. I have an awful memory and honestly it took me at least 90 pages to get back into the story. I thought Shay was still human!!! Anyway, I've rekindled with my love for the series, Wolfsbane was brilliant. Well-written, organised and comfortable. Everything flowed, it was so easy to read! We learn quite alot about the history of the Keepers, Searchers and Guardians and I don't know how Cremer comes up with these extravagant ideas! Lot's of heart-pounding action and plenty of romance, definitely one for all to enjoy!

I really admire Cremer because not only does she have to give her character's human characteristics, she has to give them animal ones too. She has to incorporate the animal half of them into her writing and that's surely not a piece of cake. Our protagonist Calla, is a strong heroine. Through the course of Wolfsbane I only grew to like her more and more. She's level-headed and she's not one of those silly little girls who drop everything for love. Important things like saving Ren. Ren...made some pretty silly mistakes in this novel and I was shocked by hiss actions but I understand why he did it. Ren loves Calla who ditched him to run of with Shay, who wouldn't be hurt? Still, the ending suggests that Calla and Ren are not over so TEAM REN! Shay, has good intentions but I really don't like to boy! I really don't see what Calla sees in him but then love s blind right? It's a love triangle but I hope Cremer has written it so that it's not too cliched.

I'll leave you with a very strong encouragement to pick up the series. It's nothing like anything you have ever read! This is one AMAZING series. Cremer is a fantastic story-teller and her writing is beautiful. After the cliff-hanger ending, I can't wait to read Bloodrose! Wolfsbane is a brilliant sequel that's filled with love, loss and loyalty. One heck of a page-turner, you'll regret not picking it up!