In My Mailbox #33 - The Month Long Edition

Guten Morgen! I'm still lying in bed but I had to get this post up today since I've been putting it off for two weeks. Also I don't want to take the photos again! In My Mailbox is a weekly meme hosted by Kristi over at The Story Siren. Basically we share the bookish contents of our mailbox!

I ususally participate every two weeks but I got lazy so this is a month-long edition! 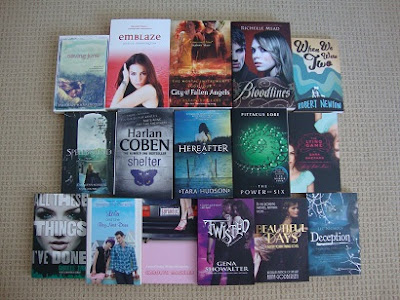 Saving June by Hannah Harrington
Spellbound by Cara Lynn Shultz
Twisted by Gena Showalter
Emblaze by Jessica Shirvington
Shelter by Harlan Coben
Hereafter by Tara Hudson
The Lying Game by Sara Shepard
Bloodlines by Richelle Mead
When We Were Two by Robert Newton
The Power of Six by Pittacus Lore ( Read and Reviewed)
Beautiful Days by Anna Godberson
Lola and the Boy Next Door by Stephanie Perkins ( Already Read, Brilliant)
City of Fallen Angels by Cassandra Clare ( Swap Anyone? Brand New?)
Guyaholic by Carolyn Mackler
Deception by Lee Nicholas
All These Things I've Done by Gabrielle Zevin 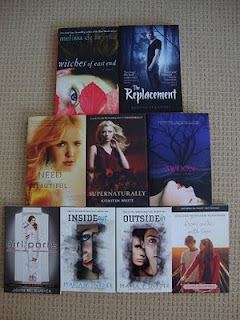 Signed Witched of the East End by Melissa De La Cruz
Girl Parts by John Cusick
From Willa with Love by Coleen Murtagh Paratore
A Need So Beautiful by Suzanne Young
Supernaturally by Kiersten White
Swoon by Nina Malkin
Signed Inside Out by Maria V. Synder
Signed Outside In by Maria V. Synder

Thanks all for now!

Posted by Badass Bookie at 9:40 AM