Ten Things We Shouldn't Have Done

Review time! Ten Things We Shouldn’t Have Done is the latest novel by Sarah Mlynowski, author of Bras and Broomsticks and Gimme a Call. I loved her Bras and Broomsticks series so I eagerly anticipated this novel! It’s been on my radar for months and I would like to thank Hachette for sending me a review copy! 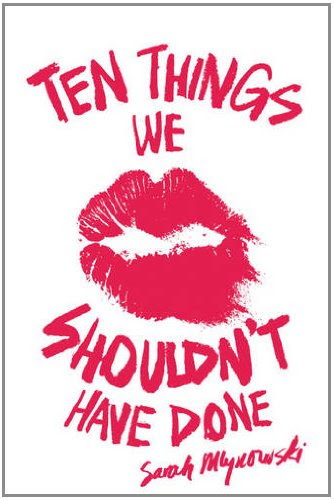 (Goodreads) 2 girls + 3 guys + 1 house – parents = 10 things April and her friends did that they (definitely, maybe, probably) shouldn't have.

If given the opportunity, what sixteen-year-old wouldn't jump at the chance to move in with a friend and live parent-free? Although maybe "opportunity" isn't the right word, since April had to tell her dad a tiny little untruth to make it happen (see #1: "Lied to Our Parents"). But she and her housemate Vi are totally responsible and able to take care of themselves. How they ended up "Skipping School" (#3), "Throwing a Crazy Party" (#8), "Buying a Hot Tub" (#4), and, um, "Harboring a Fugitive" (#7) at all is kind of a mystery to them.

The Long Story? – I think Mlynowski has written every teen’s dream down on paper. A crazy plot that’s sure to bring rounds of laughter. The plot is a little far-fetched but yet at the same things, completely believable. Teenagers are great liars and if we put our minds to it, anything can be done (even the things that shouldn’t be done). While Ten Things We Shouldn’t Have Done, is a very enjoyable novel it also covers more serious problems teens face like neglect and sex. It’s the perfect coming-to-age novel because among all the laughs it talks about the issues that teenagers face every day. A YA contemporary like no other!

I love Mlynowski’s books because not only are her plots crazy and enjoyable but her characters are likeable and funny. There is depth to them and while they’re out-going, they also harbor the same insecurities and problems that have shadowed every one of our lives one time or another. April was a fantastic protagonist. She’s got a out-going personality and she’s just one of those characters that grow on you instantly. I really felt that I could connect with April, she’s funny, sweet and confident. I absolutely adored Vi, she a wonderful friend and without a friend like her in this novel, it wouldn’t have been the same. However I really think it was the boys who stole the show. Dean could possibly the funniest characters I have yet encountered. He was hilarious. Hudson is MINE!!! What a cutie, one to grow on you instantly and he’s a complete sweetheart!