Review Time! Fury by Elizabeth Miles is a 2011 YA Debut. The novel was released last month is Australia and do yourself a favor and get a copy from your nearest bookshelf ASAP! It’s not just a pretty cover… Thanks to Simon and Schuster for the review copy! 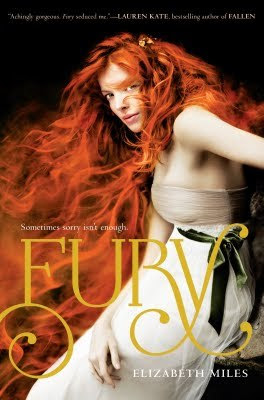 It’s winter break in Ascension, Maine. The snow is falling and everything looks pristine and peaceful. But not all is as it seems...


Between cozy traditions and parties with her friends, Emily loves the holidays. And this year’s even better--the guy she’s been into for months is finally noticing her. But Em knows if she starts things with him, there’s no turning back. Because his girlfriend is Em’s best friend.


On the other side of town, Chase is having problems of his own. The stress of his home life is starting to take its toll, and his social life is unraveling. But that’s nothing compared to what’s really haunting him. Chase has done something cruel...something the perfect guy he pretends to be would never do. And it’s only a matter of time before he’s exposed.

In Ascension, mistakes can be deadly. And three girls—three beautiful, mysterious girls—are here to choose who will pay.

Em and Chase have been chosen.


The Short Story? – A dark and seductive debut that will leave you craving for more! Dangerous, dark and sinister, Miles has written a captivating story about revenge, regret and karma. Fury will leave you sitting on the edge of your seats. A heart-pounding tale filled with the fear of the supernatural, a new twist on Greek Mythology. Fury will grab you by the next and never let you go.

The Long Story? – I was a little confused by the plot, it was fantastic but for such a complex build-up the ending was really, really simple. I thought there would be a little more to the novel but Fury was really just about bad karma. I can see that from the ending that the sequel would be much bigger and dramatic so I’m really looking forward to the second book in this seductive series. Fury was filled with mystery and this dark atmosphere. It was well planned and well written, it had just the right touch of suspense and it was just fantastic. With this debut, the line between reality and the supernatural was blurred. It’s a not a very heavy paranormal - if that makes sense. It’s rather realistic and the Furies just symbolize sweet revenge which is a truth. Definitely a debut that both paranormal and non-paranormal readers will enjoy!

For the characterization, we started with two main characters. Em and Chase – it’s almost like two different stories but their lives overlap slightly. As the novel progresses, their stories slowly become one until near the end when we end up with only one protagonist. It’s rather clever how Miles have portrayed Em and Chase. She has given them this innocence as if they are not fully aware of how serious their sins are. They’re both likeable characters so I really didn’t like to see them on the wrong side of Furies. I honestly thought Em and Chase were going to end up together and battle the Furies as a couple BUT that didn’t happen – the ending was pretty good though! I liked how Miles have worked the Furies in as important characters and not as just “prop”, she has given them personality and physical characteristics so that each girl is her own character – very clever! Overall a very good cast!

For readers who like their novels a little dark and sinister, Fury is not to be missed! A seductive debut filled with beautiful writing and prose. A captivating plot and a unique cast. Fury is deliciously dangerous and a little terrifying. One to keep your eyes out for, Miles has entered the YA community with a bang. Sweet revenge has never looked hotter!