Review Time! Just wanted to say a big thank-you to everyone, I just reached 1100 and I 'm so psyched - no seriously I'm so happy! Born at Midnight is a 2011 YA Debut written by C. C. Hunter. This one has been on my radar for months! Thanks to Pan Macmillan for the review copy! 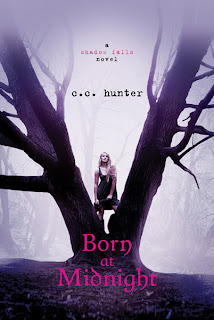 (Goodreads) One night Kylie Galen finds herself at the wrong party, with the wrong people, and it changes her life forever. Her mother ships her off to Shadow Falls—a camp for troubled teens, and within hours of arriving, it becomes painfully clear that her fellow campers aren’t just “troubled.” Here at Shadow Falls, vampires, werewolves, shapshifters, witches and fairies train side by side—learning to harness their powers, control their magic and live in the normal world.

Kylie’s never felt normal, but surely she doesn’t belong here with a bunch of paranormal freaks either. Or does she? They insist Kylie is one of them, and that she was brought here for a reason. As if life wasn’t complicated enough, enter Derek and Lucas. Derek’s a half-fae who’s determined to be her boyfriend, and Lucas is a smokin’ hot werewolf with whom Kylie shares a secret past. Both Derek and Lucas couldn’t be more different, but they both have a powerful hold on her heart.

Even though Kylie feels deeply uncertain about everything, one thing is becoming painfully clear—Shadow Falls is exactly where she belongs…


The Short Story? - Fantastic debut! If you're like me, a lover of everything paranormal and in search of a great romance - this one is for you! A very clever and highly entertaining YA novel with a interesting and complex romance. Full of drama, hot guys and tension. Comfortable and easy to read, definitely one worth checking out!

The Long Story? - It has a love triangle, just putting it out there. I'm not a fan and neither are alot of you but take it from a anti-love tranglist, I actually thought this wasn't so bad. Firstly, without the love triangle I don't think the novel would have been as interesting because while there is a bit of action it's more of a easing readers into the ideas of supernatural kind of book. Secondly, it's quite a balanced love triangle. The novel isn't swaying me to one guy or the other which is good because I want to get to know them before I judge! The plot itself was quite steady, nothing really BIG happens. There is no showdown, it's almost like a contemporary, very much of a emotional "finding yourself" plot with a paranormal touch!

I've already mentioned the love-triangle so now I'll introduce you to the people. I quite like the characters, they were entertaining and very funny! Kylie was likable character and a excellent protagonist. She's had all these bad things happen to her and yet she stills strong, even through denial that she is anything but human. Lucas, is your cliched bad boy but he's so sweet ( once you get to know him) that you can't fall in love with him! Derek is the good guy who is always there for Kylie. He's also a sweetie and it's just so hard to chose between the two. They're both so different yet the same :P

For lovers of YA paranormal with a complex and well done romance. Born at Midnight is a remarkable debut that deals with issues teenagers face daily with a paranormal twist. Unput-downable and engrossing, I can't wait to read the sequel. Anther extraordinary debut waiting to be read!