Review Time! Sirenz by Charlotte Bennardo and Natalie Zaman is a 2011 YA Debut. Following the current trend, it’s another Greek Mythology related debut however it’s got an extra sparkle to it so it’s really one of a kind! Thanks so much to Natalie and Charlotte for sending me a review copy (and the prettiest swag I’ve ever seen). 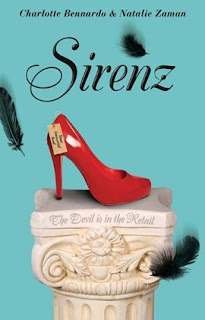 (Goodreads) Bickering frenemies Meg and Shar are doing some serious damage at a midnight sample sale when the fashionistas find themselves arguing over a pair of shoes-with fatal consequences. One innocent bystander later, the girls are suddenly at the mercy of Hades, Lord of the Underworld himself. To make them atone for what they've done, Hades forces the teens to become special-assignment Sirens, luring to the Underworld an individual whose unholy contract is up.
Finding that delicate balance between their fashion addiction and their new part-time job in the eternal hellfire biz turns out to be harder than Meg and Shar expected, especially when an entire pantheon of Greek deities decides to get involved. Then there's the matter of the fine print in their own contracts...

The Short Story? –You can tell it’s going to be a glamorous read by its Tiffany blue cover! A funny and cute debut that’s bound to make you laugh out loud. Bennardo and Zaman has written a novel like no other! Fantastic characters, beautifully written, well-planned and a plot filled with crazy wonderful things! Fashion is about to get downright dirty.

The Long Story? – I’ve read plenty of YA debuts this year and they were all pretty good but some were just better than others. Sirenz was definitely one of the better debuts I’ve this year. As I mentioned, it’s Greek Mythology with an extra sparkle. Very funny, very cute and very dramatic. Who knew Gods and Goddess’ could be such prima donnas? Well-written, comfortable to read and a glamorous storyline, I read Sirenz cover to cover. One to be enjoyed by readers of all ages, if you’re a fashion fanatic looking for a new read – pick Sirenz, it’s the new “it” book.

Sirenz is told from the alternating perspectives of Shar and Meg – two frenemies. My guess would be that Bennardo wrote through one character and Zaman wrote through another (Charlotte – Shar and Natalie – Meg…maybe? Did I get it right?). I love books that are told from different characters so instant brownie points. What I really loved about the characterization is that Shar and Meg are so different yet they can work past their differences to eliminate a “common enemy”. Both characters are funny, brave, adorable and quirky yet they are so different. It’s almost like Bennardo and Zaman has worked little bits of their own personality into these characters. Well developed and likeable, without Shar and Meg, this debut wouldn’t be the same. Another thing I like about the characterization was the Gods and Goddess’, Bennardo and Zaman decided to ditch the Good Samaritan act and have created these prima donna divine figures. Designer clad (kind of bitchy) Goddess’, sleazy (but badass) Gods – it’s like the creators of the world have swapped personalities with the cast of Gossip Girl. I love it! Very original!

It goes without saying that I strongly recommend that everyone single one of you, go to the nearest book shop (or Book Depo) and buy yourself a copy! It’s a guaranteed good read, very funny and cute, one that contemporary and rom-com lovers will enjoy equally as much has the paranormal crowd. Beautifully written, I look forward to reading more of Bennardo and Zaman’s writing. Sirenz is an original debut that will leave you in laugher!