Debut of the Month - All About Gina Rosati ( Auracle) 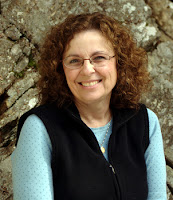 Gina Rosati’s YA paranormal romance debut, AURACLE, launched August 7, 2012, from Roaring Brook Press. Born and raised in Boston suburbia, Gina now lives with her husband and two children in New Hampshire. Gina is a long time volunteer at her local middle school library, and a member of SCBWI, the Apocalypsies and the Class of 2k12 debut author groups.

A little bit about me: The Unofficial Bio

Ohai, I’m Gina Rosati, author of Auracle (Roaring Brook Press/Macmillan). I live in New Hampshire which, for those who aren’t too familiar with the United States, is a small state in northern New England that’s smooshed between Maine and Vermont. The town I live in has a huge shopping mall, plus black bear, moose, deer, wild turkeys and four Dunkin’ Donuts coffee shops.
I was married wearing a sneaker on one foot and a cast on the other since I broke my ankle a few weeks before my wedding. My mom decorated my crutches with satin ribbons and silk roses, and it made for some really great photo ops. I have two teenage children and two chubby guinea pigs named Lily and Fiona. Before my kids were born, I had an adorable but rather naughty Yorkshire Terrier named Dougie who peed on everything vertical, so when he died of a heart attack, my husband said no more dogs L I make up for this by sharing tons of squeedorable animal pictures on Facebook.
I didn’t always want to be a writer. When I was a teenager, I had no idea what I wanted to do. “Be a secretary,” they said. “Companies are always looking for secretaries.” So I went to secretarial school and honestly, I wasn’t crazy about the whole secretary thing. Studying to be something you don’t want to be is stressful, and when I was 19, I began experiencing sleep paralysis and lucid dreaming. These are realistic dreams where you think you’re awake, but you can’t move, and in my case, they were always accompanied by a deafening buzz. Years later, I read a book by psychic Sylvia Browne and she described my dreams right down to the buzz, saying it’s what happens when you’re astrally projecting and you wake up when you are half out of your body.
Since cool stuff like astral projection doesn't usually happen to me, I still think my dreams were the result of stress, but that idea was the seed that would eventually grow into Auracle. While I was working as a secretary, I took a creative writing college class and the teacher was very encouraging. It took me a while to find my writing voice, but when my mom was going through last stage Alzheimer’s, I decided life is short and it was time to get serious about writing. It took me five years from the time I sat down and typed the first sentence until I saw Auracle on the shelf of my local bookstore. It wasn’t easy, but it’s a phenomenal feeling to accomplish a goal!
When I’m not writing or reading, I’m usually doing family stuff, I volunteer weekly in our local middle school library, and I love to bead and crochet.
~~~~~~~~~~~~~~~~~~~~

Bookie's Note: Hey Guys! I wasn't actually planning to do Debut of the Month for both October and November but at the last minute Gina's post came though so YAY for us all! I am aware Auracle *isn't* a November debut but it's still a 2012 Debut and it totally deserves a feature! Please come back tomorrow to join Gina for the second half of her feature and for a giveaway!