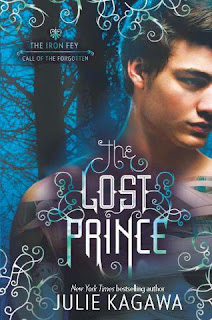 (Goodreads) Don’t look at Them. Never let Them know you can see Them.

That is Ethan Chase’s unbreakable rule. Until the fey he avoids at all costs—including his reputation—begin to disappear, and Ethan is attacked. Now he must change the rules to protect his family. To save a girl he never thought he’d dare to fall for.

Ethan thought he had protected himself from his older sister’s world—the land of Faery. His previous time in the Iron Realm left him with nothing but fear and disgust for the world Meghan Chase has made her home, a land of myth and talking cats, of magic and seductive enemies. But when destiny comes for Ethan, there is no escape from a danger long, long forgotten.


The Short Story? - If you're a fan of Kagawa's Iron Fey series, this is definitely not one to be missed! With the introduction of new characters and the appearance of familiar faces. The Lost Prince brings about a round of nostalgia as we revisit Nevernever and follow Ethan, Meghan's brother on a new adventure. Written with Kagawa's familiar and welcomed prose and flair, The Lost Prince is a fantastic start to a spin-off. Highly entertaining, Kagawa strikes again!

The Long Story? - Normally I'm not a huge fan of spin-off series because I've always felt that if a series ends nicely - no matter how popular it is - we should just let it be because more often than not, the spin-off is not as good as the original. In this case, that was the case but I'm more lenient because I absolutely adored The Lost Prince! The Iron Fey was still *better* but I've only read book one and with Kagawa, it's only going to get better so I can't judge yet! The story takes place 13 or so years after Meghan becomes the Iron Queen and follows Ethan, Meghan's brother who was kidnapped in the first Iron Fey. It's a good plot, attention-grabbing and fast-paced but more importantly it was just nice to be back in Nevernever with the characters we love! Ethan and his friends are out to investigate the disappearance of exiles and half breeds and as a reader I really got sucked into the story! Fantastic start to a series!

The old characters - Meghan, Ash and Puck - don't play as big of a role in The Lost Prince as what I expected but that wasn't necessarily a bad thing since it's a new series and that calls for new characters. However I felt that I had trouble connecting with the new characters. I've always loved books written through male perspectives however I found it hard to relate to Ethan because he was so angry all the time! I get that he was meant to be angsty and angry, typical teenage bad boy but he lacked the charm! He was all anger and no appeal! I did eventually connect with Ethan as the novel progressed but it was a bumpy start! Kenzie annoyed me in parts of the novel, she had her heart in the right place but honestly she just made things worst. She's not a particularly strong character and Kagawa has given her a little bit of a damsel in distress feel which doesn't make her the most appealing of love interests but her bubbly personality really reached out to me! Overall, the characterisation wasn't the best but I'm sure Kagawa has plenty of character development planned ahead for us!

In a nutshell, The Lost Prince is definitely one to check out for fans of the Iron Fey series, the ending suggests that Kagawa has something epic planned for book 2 and I doubt she will fail to deliver! The characterisation could do with a little work but I absolutely loved the plot! For those of you missing Nevernever and would love to revisit, The Lost Prince offers you the experience all in a nicely wrapped package!