Review Time! E X A M S are over and you know what that means! I'm back to blogging regularly! :)  Defiance by C.J. Redwine is a 2012 YA Debut published by Atom in September. Read this one a while back and just haven't gotten around to reviewing it! You can purchase a copy of the book from Fishpond | The Nile | Booktopia | Bookworld Thanks to Hachette for the review copy! 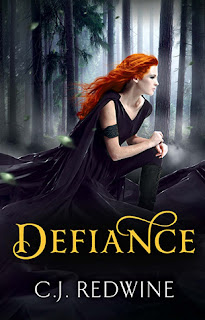 (Goodreads) Within the walls of Baalboden, beneath the shadow of the city's brutal leader, Rachel Adams has a secret. While other girls sew dresses and obey their male Protectors, Rachel knows how to survive in the wilderness and deftly wield a sword. When her father, Jared, fails to return from a courier mission and is declared dead, the Commander assigns Rachel a new Protector, her father's apprentice, Logan--the same boy Rachel declared her love for two years ago, and the same one who handed her heart right back to her. Left with nothing but a fierce belief in her father's survival, Rachel decides to escape and find him herself. But treason against the Commander carries a heavy price, and what awaits her in the Wasteland could destroy her.

At nineteen, Logan McEntire is many things. Orphan. Outcast. Inventor. As apprentice to the city's top courier, Logan is focused on learning his trade so he can escape the tyranny of Baalboden. But his plan never included being responsible for his mentor's impulsive daughter. Logan is determined to protect her, but when his escape plan goes wrong and Rachel pays the price, he realizes he has more at stake than disappointing Jared.

As Rachel and Logan battle their way through the Wasteland, stalked by a monster that can't be killed and an army of assassins out for blood, they discover romance, heartbreak, and a truth that will incite a war decades in the making.


The Short Story? - A very interesting concept for a debut novel with the combination of YA fantasy and dystopian. I absolutely loved the strong characters, very well developed and connectable! The prose was good and the writing was comfortable. There were aspects of the plot that didn't sit well with me but overall it was definitely edgy and different. Redwine's debut novel is definitely unlike anything I've ever read, it's a very unique premise that I'm sure many of you would find right up your alley!

The Long Story? - There was a lot of hype surrounding the release of Defiance and I'm not quite sure whether it lived up to my expectations. The premise and concept of the novel was very interesting, Redwine definitely had the right concept in mind but when the idea was put to paper, something didn't sit well with me. For the most part, I enjoyed Defiance VERY much however there was just a few things that just wasn't my cup of tea. Namely, the plot - it was solid plot but the way the story was delivered didn't immediately draw me in. It was really slow paced and there were parts that didn't flow very well. The romance didn't sit well with me at all, I'm not a hater of instant love but for two characters who have can't stand each other to BOOM romantic feelings for each other and love confessions in like a week, it's a little hard to believe. However it wasn't all bad, for the most part the plot was well done once you got into the story, it's not a predictable plot and I emphasis the unique premises. A medieval town in a dystopian world is definitely not something that YA has produced before!

The characterisation is definitely my favourite part of the novel. Redwine did a fantastic job developing the characters especially the protagonists Rachel and Logan. I liked Rachel's attitude and personality very much, she's tough and she fights for herself which is not really a trend in YA dystopian. You get quite a lot of silent rebellion but this outright boldness is not seen often and I loved it! She was very badass and while she doesn't like to show it, she's definitely a kind person as well. Logan grew onto me as the novel progressed, he wasn't one of those boys that immediately attracted me mainly because he wasn't a typical "bad boy" or a bad boy at all and I liked my bad boys in YA fiction. However as the novel progressed and as I got to know him, he kinda grew on me! Both characters were wonderfully developed and unique. Another character that I fell in love with was Oliver! Overall, a great characterisation!

Defiance wasn't entirely what I thought it was going to be but overall I still thought it was a book that deserved to be read. The originality is very unique especially in a genre like YA where everything that can be done has already been done. The writing was beautiful and for the most part, I *did* enjoy the plot, everyone knows slow paced novels are my cup of tea but I got through this one so it must have been pretty good right?!? A unique debut with beautiful character, I can't wait to see where the sequel thats both Logan and Rachel! :)

What's it Worth? - Sqeeuze Into the Budget/ Hand Over the Paycheck

Email ThisBlogThis!Share to TwitterShare to FacebookShare to Pinterest
Labels: Atom