Review Time! Goddess Interrupted by Aimee Carter is the sequel to 2011 Debut The Goddess Tests which is a fresh take on the Hades and Persephone Greek myth. If you haven't read The Goddess Tests, I highly recommend you do! Goddess Interrupted in available for purchase in bookstores and The Book Depository ( direct link). Thanks to Harlequin Teen Australia for the review copy! 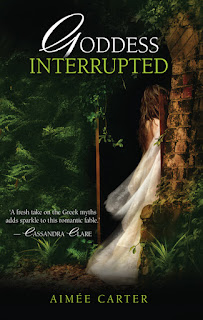 (Goodreads) Kate Winters has won immortality. But if she wants a life with Henry in the Underworld, she'll have to fight for it.Becoming immortal wasn't supposed to be the easy part. Though Kate is about to be crowned Queen of the Underworld, she's as isolated as ever. And despite her growing love for Henry, ruler of the Underworld, he's becoming ever more distant and secretive. Then, in the midst of Kate's coronation, Henry is abducted by the only being powerful enough to kill him: the King of the Titans. As the other gods prepare for a war that could end them all, it is up to Kate to save Henry from the depths of Tartarus. But in order to navigate the endless caverns of the Underworld, Kate must enlist the help of the one person whom she would really rather not meet. Henry's first wife, Persephone


The Short Story? - Goddess Interrupted was even better than The Goddess Tests! Carter's retelling of the popular Greek myth of Hades and Persephone is both addictive and unputdownable. Think soap opera with less scandals but more drama. One of the most authentic romance tag lines I've read in recent years ( post- Twilight), this is definitely one heck of a sequel! Exciting, original, heartbreaking, beautiful and undeniably romantic! A must-read!

The Long Story? - I know some people weren't all that impressed with the first book and I agree some parts could have needed a little more work but Goddess Interrupted had me hooked from page one! It's definitely better written and the plot was more interesting in my opinion. I love those "saving the world" plots and Goddess Interrupted was exactly that! Cronus and Calliope want to wipe out humanity and take down the Greek gods in process but Kate and her can-do family are here to save the day! There was danger, sacrifice, fights and adventure - all things that made a good novel. However more than anything I was taken by the romance. The romance was almost to hot to handle, there was so much drama between Kate and Henry. There were points in the book were I wanted to jump in the pages and shake Henry and say "OMG Henry FIGHT FOR HER! DO SOMETHING". The authenticity of their relationship is brilliant, they have problems and they're fighting for a happy ending. It wasn't insta-love and their is definitely build-up and development - JUST LIKE A REAL RELATIONSHIP! Overall, I'm very impressed with Carter's Goddess Interrupted!

I'm also most impressed with the characterisation. Part of the reason Henry and Kate have such an authentic relationship is because they're authentic characters. We're taking about major ( believable) flaws in their personality but together they're perfect. Kate is far from perfect but I adore her anyway. She's not much of a heroine but she desperately wants to help and make a difference. She's willing to put others before her and her determination and empathy is admirable! She's a little clingy, a little insecure and a little jealous but then again Henry gives her every reason to be so. Henry is a complicated individual, he's the biggest sweetie but he's like romantically awkward and can't show affection. However he clearly loves Kate, I just wished he could show it... Overall, very good characterisation!

In a nutshell - if you don't read Goddess Interrupted, we can't be friends! Carter's got it just right! Not too much romance, just enough drama and a "save the world" mission that ends in an unbelievable cliff hanger, I think this might be the cliff hanger of all cliff hangers! I look forward to the finale of this series. This is an extraordinary greek myth retelling, definitely worth every cent! Go buy it! :)