Review Time! For the first time in months - I have a review pile. As in more than one book to review - this means that I'm not behind anymore! *happy dance* Article 5 by Kristen Simmons is a 2012 YA Debut. Kristen was one of my debutantes therefore I feel this creepy maternal love for this book. Thanks to Murdoch Books ( Pier 9) for the review copy! :) 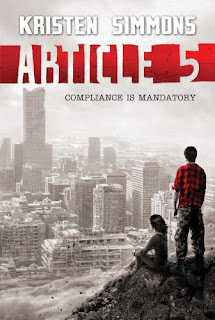 The Bill of Rights has been revoked, and replaced with the Moral Statutes.

Seventeen-year-old Ember Miller is old enough to remember that things weren't always this way. Living with her rebellious single mother, it's hard for her to forget that people weren't always arrested for reading the wrong books or staying out after dark. It's hard to forget that life in the United States used to be different.

Ember has perfected the art of keeping a low profile. She knows how to get the things she needs, like food stamps and hand-me-down clothes, and how to pass the random home inspections by the military. Her life is as close to peaceful as circumstances allow.

That is, until her mother is arrested for noncompliance with Article 5 of the Moral Statutes. And one of the arresting officers is none other than Chase Jennings—the only boy Ember has ever loved.


The Short Story? - What a breathtakingly amazing debut! If I had expectations for Article 5 - they were exceeded. One of the best YA dystopian fictions I've ever read ( that's saying ALOT!) - Simmons has written an remarkable and original debut! Filled with adventure, danger, love and sacrifice, Article 5 is dystopian written at it's best. One you don't want to miss out on! Two thumbs up!

The Long Story? -  I'm thanking  Simmons for writing Article 5 so that it's not just "another dystopian fiction". There was excitement, there was danger, there was adventure and there was a PLOT. From cover to cover, Article 5 was an intense and heart-pounding roller coaster ride.  This wasn't just another novel, where everyone just sat around and was dictated until the last 50 pages when suddenly - A REBELLION APPEARS! There was build-up, there was a chase across the country, there was twists and turns and there was romantic side story. Unpredictable, original and well-written. Simmons has a very authentic YA narrative voice, she's mastered the use of sarcasm and snark - two of the three implements of teenage speech ( the last one being swearing). Simmons has truly done a fantastic job with her debut, I LOVED IT and I'm sure many of you would too! Article 5 is definitely one that I would recommend to everyone!

The characterisations was very well done. Simmons has written this book so well that her characters personalities were carried through her dialogue. I connected with Ember from page one and the ability to bring out characterisation through speech SO WELL is hard. I'm amazed by how authentic Simmons' characters are. Ember was a great protagonist. She was in the right mind, she had her priorities straight and she was one hack of a badass. I loved how Ember developed throughout the book, initially she was a little bit of a damsel in distress. She couldn't defend herself, she was scared but as the novel progressed she became more tough and independent. What carried throughout the novel was her courage and bravery, she wasn't willing give in at all. She was scared but she put up a good front. Ember was definitely one of those protagonist that you just can't help but admire. Another character I grew quite attached to was Chase. He wasn't just a pretty face and he clearly cares a lot of Ember even though he is resilient to show it sometimes. Ember and Chase had history prior to the novel but it was the falling back into love that really showed the bond between the two!

In a nutshell, there isn't much else I can say about this novel except it's a must read! Honestly, one of the best dystopian novels I've read - I would be disappointed if anyone read this review and gave it a pass! Simmons' narrative voice is definitely something unique. If you love a badass protagonist, broody bad boys, a not-so-silent rebellion and breaking the law Article 5 is calling your name!