Review Time! Catching Jordan by Miranda Kenneally was released in December last year but if you're been with me for some time, you would know that Miranda was one of my 2012 Debutantes! BE JEALOUS because the lovely Miranda, sent me a personalised copy of Catching Jordan! THANK-YOU SO MUCH! It's definitely a prized possession! 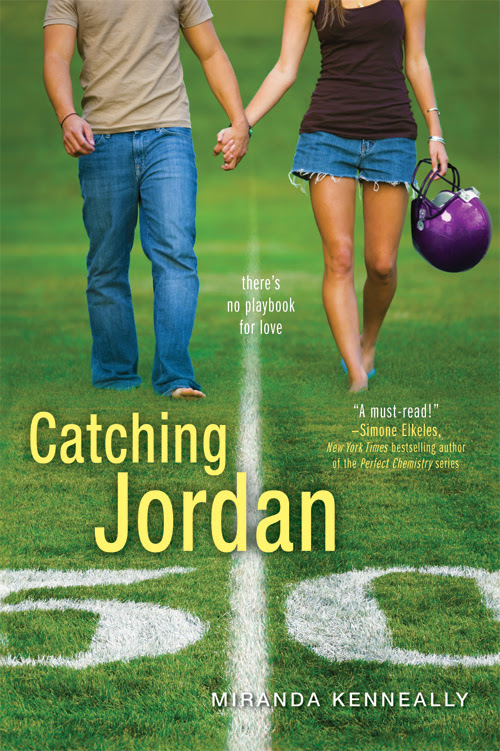 (Goodreads) What girl doesn't want to be surrounded by gorgeous jocks day in and day out? Jordan Woods isn't just surrounded by hot guys, though-she leads them as the captain and quarterback of her high school football team. They all see her as one of the guys, and that's just fine. As long as she gets her athletic scholarship to a powerhouse university. But now there's a new guy in town who threatens her starting position... suddenly she's hoping he'll see her as more than just a teammate.

The Short Story? - A quick contemporary read and that has become one of my all-time favourites! Catching Jordan is an extraordinary debut thats explores problems like first love,friendship and neglect. A bittersweet story about a girl who's "one of the boys", her dreams and the boys who love her. Kenneally's YA debut is not to be missed - funny, thought provoking and completely unputdownable!

The Long Story? -  We don't get many sports related novels in YA and when we do they're usually rom-coms with some soccer matches thrown in between. I definitely wasn't expecting Catching Jordan to be so deep, honestly I was expecting a rom-com with no deeper meaning than enjoyment. Instead I get a complex contemporary romance with more depth than than the deep blue sea! Kenneally has an authentic YA voice that pulls you into the story and never lets you go. Easy to get lost within, Catching Jordan had a wonderfully bittersweet plot that had the right mixture of humour and "serious stuff". The novel explores issues such as meeting expectation, proving yourself and dealing with complicated (but insanely cute) boys! Kenneally's debut really was a jewel amongst the rocks, definitely one of my favourite contemporary reads in 2012! Two thumbs up!

I loved the characterisation of this debut! Catching Jordan had just about the most perfect cast ever! I think Jordan might be one of my favourite protagonist I've ever come across in a novel. She's such an inspiration to teenagers! She just doesn't take the crap that teenagers give everyday at school. She's confident, she's funny and more than anything she's a loyal friend. Sam Henry is a legend, not only is he the funniest character I've met, he's a huge sweetheart ( and a total guy!). Just thinking about Sam makes me smile - this is the kind of boy that's a keeper. Ty, he was great too but there is something off about he's possessive side for me although I'm sure plenty of girls would find it sexy! If you love amazing protagonists and complicated yet gorgeous boys - Catching Jordan is calling your name!

All in all, I think I could have written a better review for such a phenomenal debut but this is what happens when I leave books on the review pile for too long, the reviews get extremely choppy! I just hope  the fact that THIS NOVELS IS AMAZING AND EVERYONE SHOULD READ IT came across! Funny, cute and bittersweet, Catching Jordan is a refreshing contemporary that's that left no room for improvement, I'm keen to see where Kenneally takes Stealing Parker after such an amazing debut!