The Statistical Probability of Love at First Sight

Review Time! The Statistical Probability of Love at First Sight by Jennifer E. Smith is a YA contemporary release that the whole YA blogosphere has eagerly anticipated for a long time! FINALLY in January the release came upon us :) Thanks to Hachette for the review copy! 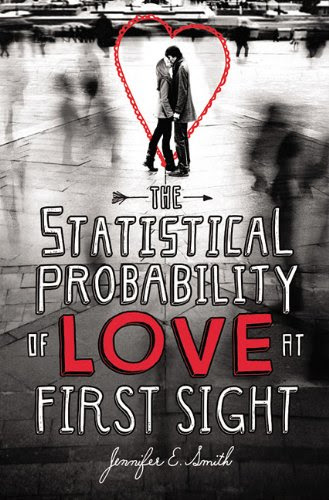 (Goodreads) Who would have guessed that four minutes could change everything?

Today should be one of the worst days of seventeen-year-old Hadley Sullivan's life. She's stuck at JFK, late to her father's second wedding, which is taking place in London and involves a soon to be step-mother that Hadley's never even met. Then she meets the perfect boy in the airport's cramped waiting area. His name is Oliver, he's British, and he's in seat 18C. Hadley's in 18A.

Twists of fate and quirks of timing play out in this thoughtful novel about family connections, second chances and first loves. Set over a 24-hour-period, Hadley and Oliver's story will make you believe that true love finds you when you're least expecting it.

The Short Story? –A quick, cute and completely bittersweet novel about love at first sight. Jennifer E. Smith has written a heart moving love story that spans over the course of 24 hours. Beautifully written, an adorable plot and two characters that make me want to believe in destiny! Thumbs up read!

The Long Story? – I think I want to marry the next guy I sit next to on a plane ;) Smith makes me want to believe in love at first sight! I really enjoyed TSPOLAFT, it everything the hype made it out to be, if there was a little more humor it would have been heaven! BUT, the novel wasn’t THAT funny – actually it covered some quite heavy topics. Smith has developed a wonderfully bittersweet plot filled with romantic encounters of two teens that meets by fate (I think). This is a love story, no vampires, no werewolves, no saving the world. JUST love between two human teenagers who happen to meet. It’s hopelessly romantic!

What a cute characterization! TSPOLAFS focuses on two teen who happen to meet (by fate – I think) at a airport. There are other characters in the book but they’re of no importance – really! Hadley our protagonist is a teenager dealing with the divorce of her parents and the fact that her dad is getting remarried. Hadley is strong, she keeps all her emotions inside and while she is bitter about her parent’s divorce she really just keeps it to herself. The best thing about Hadley is how normal she is! She’s an ordinary teen, like me and yet her story is so special! We can all relate to her! Oliver is everything that I look for in a guy, he’s a gentlemen, he’s hilarious, good-looking but also kind. The pairing of Hadley and Oliver is really top class! Fantastic Smith!

The Statistical Probability of Love at First Sight is romance in it’s true form. This was romance before Twilight – where guys were human! YOU will love this, YOU will laugh, YOU might cry but YOU definitely should seek the opportunity to read it! Smith has written a winner of a contemporary, she’s written a love story about how love should be. I BELIEVE in LOVE at FIRST SIGHT!

What’s it Worth? – Hand Over the Paycheck/ Break Out the Piggybank

Email ThisBlogThis!Share to TwitterShare to FacebookShare to Pinterest
Labels: Headline