Review Time! My blog has been a complete mess lately! I’ve been so busy and in a huge state of a reading slump, my blog has been neglected. Hopefully I can get back on track this week! Last week I read Au Revoir, Crazy European Chick by Joe Schreiber! Thanks to Hardie Grant Egmont for the review copy! 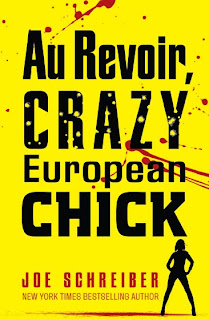 (Goodreads) Perry Stormaire is a normal high school senior– he is busy applying to college and rehearsing with his band –until he agrees to go to the prom with the Lithuanian exchange student who is staying with his family. It turns out that Gobi Zaksauskas is not the mousy teenager that she seems but rather an attractive, confident trained assassin. Instead of going to the prom, Perry finds himself on a wild ride through the streets of New York City as Gobi commandeers the Jaguar his father lent him for the prom in order to take out her targets. Perry learns a lot about himself – and ends up with some amazing material for his college application essays.

The Short Story? – There is something about this book that gives off the “wow factor”.  Whether it was the female assassin or the epic prom night out in New York City, Au Revoir, Crazy European Chick was brilliant. The novel really came together nicely with great characters and a spectacular plot. If you love car chases, female assassins, revenge and action as much as I do – this is your next read!

The Long Story? – I have read many books that I love but not all of them have the “wow-factor” – in fact very few of them do. What is the “wow-factor”? Something about the novel that makes it stand out from the rest – distinctively. In this case, Au Revoir, Crazy European Chick has a one of a kind plot. Honestly, what is not to love about a well-written novel with car chases, bullets flying, female assassin and prom nights gone wrong? I LOVED the plot – it was different, exciting, action-packed and one big breathless adventure. Perfect for boys and girls, this ain’t no sappy love story – this is a story of a girl and a boy and what happens on prom night!

I don’t read many YA novels with male protagonists and when I do I usually find that there is always a barrier between us and therefore I can’t enjoy the book as much as I would have liked. Not the case with Au Revoir, Crazy European Chick. I loved Perry – what a charming and completely adorkable boy! Great personality and totally relatable on some level (I mean, I’m a girl!) + he’s a great guitar player. Our crazy, European chick was so badass I want to be a female assassin too! Gobi is the very definition of badass! Great girl, I think we have a future of being best friends :P Maybe she’ll teach me some tips of the trade… Fantastic characterization!

Au Revoir, Crazy European Chick would make a fabulous addition to your shelves! If there is anything I know about a “wow-factor” it’s that they are not to be missed! Joe Schreiber has written a winner of a novel and the only thing that would make it even better would be a sequel! Unputdownable and filled to the brim with adventure. Two thumbs up!

What’s it Worth? – Hand Over the Paycheck/ Break Out the Piggy Bank