Review time! I’m trying to slip back into my reading routine after the stuff up because of exams and it’s hard! I just can’t seem to find the time (or heart) to read! Luckily I have wonderful books to ease me back into reading! Tiger’s Voyage is the third book in Colleen Houck’s New York Times Bestselling series! Thanks to Hachette for the review copy! 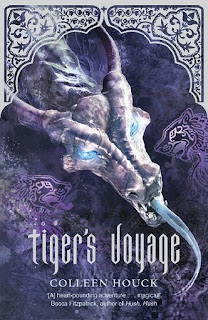 (Goodreads) In the third installment of the Tiger series, Kelsey Hayes pushes through the pain of lost love and strengthens her friendship with Kishan. Despite his strong feelings for her, Kishan has agreed to be her ally in helping her reunite with the man she still loves. Together, they seek to help Ren regain his memory and begin the search for the third magical gift—an object of power that will help break the curse that causes them to live part of their lives as tigers.

They board a luxury yacht and seek Durga's aid once again, who supplies them with her golden weapons. With Nilima, Mr. Kadam, Ren, and Kishan at her side, she soon learns that the task ahead will be even more difficult than the others. Confronting a dark magician, multiple dragons, and terrifying denizens of the deep seems easy when compared to facing the daunting task of stitching up her heart. Just when she thinks she's ready to set her feet on a new path, she is yanked back with a jolt to the one she's determined to leave behind.


The jarring tug-of-war that ensues for Kelsey's heart leaves her anxious and confused. Combined with the stress of almost being killed every other day, it would appear that saving the tigers is almost more than she can handle. Still, she presses on, knowing that a choice is looming on the horizon. One she cannot put off making for long.

The Short Story? – The saying ‘don’t judge a book by its cover’ has never rang truer than with this series! I’m not a big fan of the covers but I love the books! Houck does not disappoint with the third installment in this remarkable series. Another epic fantasy with a strong and addictive romance. Beautifully written, a complicated and thorough plot. This series is truly a hidden gem waiting to be read! Bravo!

The Long Story? – Did you know Tiger’s Curse sat on my shelf for ages before I picked it up and thought “this is fantastic – MUST READ MORE” That initial fascination and addiction to this fantastic series has not faded, if anything this books have gotten stronger and stronger as we progress! I absolutely loved Tiger’s Voyage. Again, I have to praise Houck on her excellent research skills. To set a novel in a foreign country and base it around mythology and culture is a hard feat and Houck has done a brilliant job. Very detailed plot, filled with information and interesting facts about India. Readers not only follow the characters on an epic adventure but they are learning something new with each turn of the page! This is as good as it gets with epic fantasy. If you are hesitating about this series, DON’T! The Tiger Saga is one of my favourite discoveries of 2011 and Tiger’s Voyage was spectacular. A fantastic page-turner.

It goes without saying that for me, a novel without romance is not a novel at. I think it’s safe to say that The Tiger Saga has perhaps one of the best romances in YA fiction. Filled with drama, tension, heartbreak and pain – it’s a brilliant romance. Experience love triangles like you never have before. Phenomenal romance! Without the characters, the romance wouldn’t have been so good. Kelsey is one of my favorite YA characters. She’s smart, stubborn, strong and filled with love and compassion. She’s very well developed and definitely likeable. I feel like I’ve grown closer to her as the series has progressed. I was very disappointed in Ren at the end of the second book, it wasn’t his fault but he caused so much heartbreak for Kelsey, it hurt ME to read it. He really redeemed himself in this novel but I’m completely torn between him and Kishan. Initially I was Team Kishan and then Team Ren and now I’m stuck in the middle. They both have their goods and bads, keen to see where the final installment leads. Overall great romance and great characters!

In a nutshell, no matter how you look at it, this series is a must read! If you have been keeping up with the Tigers, Tiger’s Voyage is fantastic! Houck has written a fantastic series, comfortable, exciting and adventurous. One of the greatest YA romances that I’ve ever read and an epic fantasy that will not disappoint. This series is a winner and it’s breathtakingly brilliant! I salute Houck for writing a stunner of a good read!