Review Time! Drink Slay Love written  by Sarah Beth Durst, the author of Enchanted Ivy. It's a little like a movie parody ( hence the title), it's basically mocking it's own genre and it's fantastic! Thanks to Allen and Unwin for the ARC! 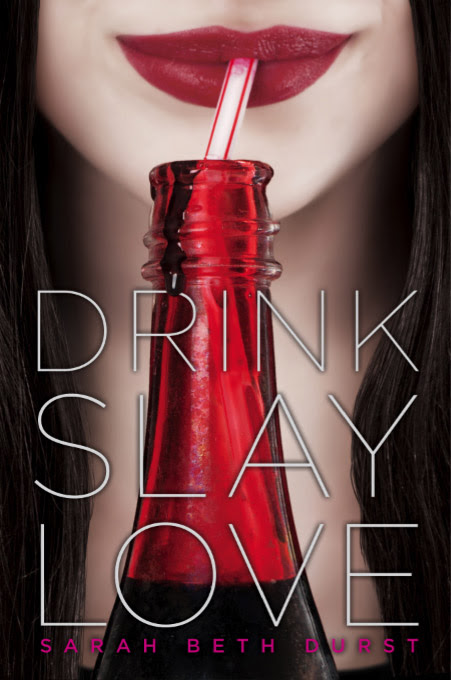 (Goodreads) Pearl is a sixteen-year-old vampire... fond of blood, allergic to sunlight, and mostly evil... until the night a sparkly unicorn stabs her through the heart with his horn. Oops.
Her family thinks she was attacked by a vampire hunter (because, obviously, unicorns don't exist), and they're shocked she survived. They're even more shocked when Pearl discovers she can now withstand the sun. But they quickly find a way to make use of her new talent. The Vampire King of New England has chosen Pearl's family to host his feast. If Pearl enrolls in high school, she can make lots of human friends and lure them to the King's feast -- as the entrees.
The only problem? Pearl's starting to feel the twinges of a conscience. How can she serve up her new friends—especially the cute guy who makes her fangs ache—to be slaughtered? Then again, she's definitely dead if she lets down her family. What's a sunlight-loving vamp to do?

The Short Story? - Brilliant! A satirical take on vampire pop culture, Drink Slay Love is a entertaining novel filled with humour, excitement and action. Durst has written an phenomenal page-turner giving readers a brand new perspective of vampires. Witty, sarcastic and hilarious, Drink Slay Love is a refreshing paranormal like no other!

The Long Story? - What's not to love about this novel? From cover to cover it was brilliant. Vampires, unicorns, cute boys and a showdown at prom? Yes please! Highly entertaining, it surprises me that to no end that this satirical take on vampires is perhaps the most accurate. Durst has re-established the predator and prey element of vampire fiction that was somewhat lost somewhere in 2009 when Twilight took over. In this novel, vampires are cruel, heartless predators who view humans as food not lovers. Very original and different. Instead of the cliche Vampire/ Werewolf duo, Durst has introduced the Unicorns! An unputdownable YA that will leave you crying in laughter!

I love the characters in this novel. Pearl is a fantastic protagonist! A instant like for the vampire who got stabbed by a unicorn and developed a conscience. Pearl is witty, sarcastic and level-headed. She's smart and badass, if anyone gives the vampire vibe it's her. Evan is our love interest and he truly is brilliant. A boy with OCD and an urge to help save the world, he's sweet, funny and the keeper of a big, BIG secret! There were plenty of great characters in the book, loved all the vampires not because they were nice but because they are VAMPIRES, the way vampires should be.  Bethany is another favourite, great best friend and very perky! Matt and Zake, hilarious duo and Tara? The nice A-list. Great cast, well developed and very, very funny!

Drink Slay Love is a must-read for all those readers out there who want to see vampires like they should be. A satirical take on our favourite mythical creature, Drink Slay Love is both witty and hilarious. A combination of humour and action, this novel brings out all the great aspects of YA fiction! Great character, fantastic plot, Drink Slay Love is a specatular YA that will sate your craving for words ( pun intended)! Bravo!