Review Time! Pandemonium is the eagerly anticipated sequel to Lauren Oliver's bestselling YA dystopian, Delirium! If you haven't read Delirium, you should because it's plain awesome! Lauren recently visited Australia and it's such a shame I couldn't make her book signing but I'm sure I'll get to meet her one day! :) Thanks to Hachette Australia for the review copy! 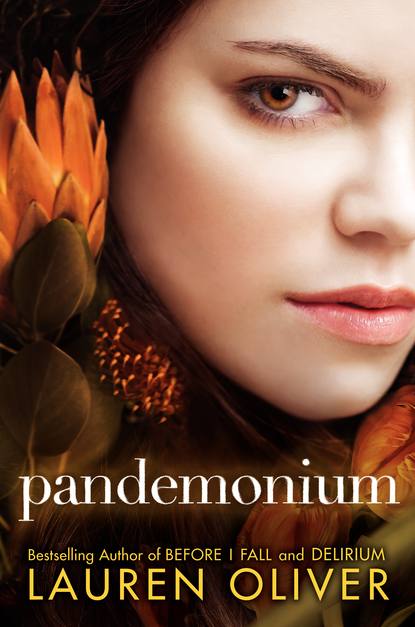 (Goodreads) I’m pushing aside
the memory of my nightmare,


pushing aside thoughts of Alex,

pushing aside thoughts of Hana
and my old school,

like Raven taught me to do.
The old life is dead.


But the old Lena is dead too.
I buried her.

I left her beyond a fence,
behind a wall of smoke and flame.

The Short Story? - Oliver never fails to impress! After reading raving reviews for months I can now safely say that yes, they weren't exaggerating - Pandemonium was mind-shatteringly amazing! An edgy and exciting plot, a romance tagline that keeps getting better and Lena! I'm so proud of this girl, she's toughened up and she's so so brave! If you love your novels everything dystopian and if you're a lover of great romance tag lines - this one is for you!

The Long Story? - I like Pandemonium much better than Delirium, although Delirium was fantastic as well! The plot was more productive and interesting. In this book Lena and her new wilderness friends join the resistance to fight the corrupt government. Lena is under the impression that Alex died the night that they tried to escape ( he doesn't - I thought you'll appreciate this spoiler). However Alex doesn't make an appearance in Pandemonium! The whole novel is a little bit of a dangerous survival adventure. I don't want to spoil it too much for you guys but - there is a new guy on the block. The story is very much evolved around him and it seems like Lena might have fallen for this guy. This deliciously delirious plot combined with Oliver's fantastic prose has got my craving for Book #3. Oliver sure knows how to end with a bang, after that killer cliff hanger - I feel 2013 can't come fast enough!

I feel as if Lena is a completely different girl and in a way she is. In the novel Lena says " the old Lena is dead, I buried her, I left her beyond a fence, behind a wall of smoke and flame" and even word of that quote rings true. This new Lena is a badass. She's calm, she's brave and more than anything she wants to fight with the resistance, the illusion of deliria being a disease has been shattered and Lena believes everyone should be able to love and she's willing to fight for that. I admire her bravery, even in the worst of situation, she keeps level headed and she fights. I'm so proud of this Lena! I won't say much about the new guy but I have a soft spot for him. He clearly cares about Lena and while he isn't Alex, he's somebody that could make Lena very happy! Overall good characterisation ( as expected)!

If you love dystopian and a solid love story, Pandemonium might just be your next read. Of course, you will have to read Delirium first but both novels are an absolute delight to read. Fantastic plot, extraordinary romance tagline and a heroine that might just be a badass in disguise. Brilliantly written, if you haven't read Lauren Oliver, nows the time to start!


Rating - Hand Over the Paycheck