Debut of the Month - All About Silver + Giveaway 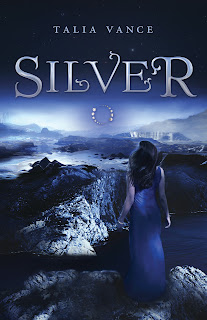 
"As I step into the room, a silver flash blurs my vision. Before I can take a breath, the world falls away."

Brianna has always felt invisible. People stare right past her, including the one boy she can't resist, Blake Williams. But everything changes at a house party when Brianna's charm bracelet slips off and time stands still. In that one frozen, silver moment, Blake not only sees her, he recognizes something deep inside her that she's been hiding even from herself.

Discovering she is descended from Danu, the legendary Bandia of Celtic myth, Brianna finds herself questioning the truth of who she is. And when she accidentally binds her soul to Blake, their mutual attraction becomes undeniable.

But Blake has his own secret, one that could prove deadly for them both.
Bound together by forbidden magic, Brianna and Blake find themselves at the heart of an ancient feud that threatens to destroy their lives and their love.

“I just want to look.”  His voice is soft, seductive.

I don’t move.  He lowers his chin and looks out from underneath thick lashes.  I know it’s just a bracelet, an accessory.  There is no logical reason for me to keep it from him.  But nothing about Blake or the feelings he stirs in me has anything to do with logic.  Everything is driven by some primitive instinct, animalistic urges that I should damn well ignore.  I unfurl my fingers, one at a time, still covering the bracelet with my palm.

Blake eases forward, placing his hand over mine.  I pull my hand away from the heat of his touch.  “Shhh,” he says, like he knows I’m a hare’s breath away from bolting.  He reaches for my hand again, taking the bracelet between his fingers and rubbing it lightly.   He examines the charms one at a time, stopping to touch the flower for a few seconds before his cocky smile is back.  “Someone in your family has a wicked sense of humor.”

How does he know that the charms came from my family?  “What do you mean?”

“This one.  Do you know what kind of flower it is?”

“Yes.”  At last, something tangible I can discuss intelligently.  “Anconitum.  Also called wolfsbane or monkshood.  It grows in the northern hemisphere.  My grandma even managed to grow some in her yard in San Francisco.”

I push his hand away.  His eyes shine again in the dark, reflecting the stars.  I’ve been waiting so long for him to see me, that it’s every bit as terrifying as it is amazing.

“Can you take it off for a minute?”

I cover the bracelet with my hand again.

“Just to see if I’m right. You can put it right back on.”

There have to be at least a dozen better explanations for my condition than a simple silver charm.  Maybe my pheromones are finally kicking in, albeit erratically.  Or Blake is just jealous of Austin.  Or Blake is drunk again.  I twist the chain and slowly unhook the shiny new clasp.  I let the bracelet drop into the palm of my hand, closing my fingers around it.

Blake stares at me harder.

I close my fingers tighter, not wanting to part with the chain in my hand.  I know it’s just a charm.  An odd little flower cast in silver.  I still don’t let go.

The bracelet has been in our family forever, so old that the story of its origin was lost generations ago.  Nana gave it to me shortly after the fire, my fire.  She said it would protect me.  And I loved the little horse and horse shoe charm that hung on either side of the strange flower.  I haven’t really thought much about it since she gave it to me.  I just always wore it.

Blake outstretches his hand to take the chain.  “Humor me.”  He flashes his “you can’t resist me” grin.

All this time I’ve been waiting for him to grace me with that smile, and tonight it has no effect on me.  I’ve seen him use it too many times to think it means anything beyond a calculated effort to get what he wants.  I clutch the bracelet tighter.  “Why don’t you humor me?  Maybe I don’t want to give this to you.  Maybe there’s a reason I can’t.”  I link the chain back around my wrist.

“Listen to yourself.”  Blake’s voice is quiet.  “There is a reason.”

I try to keep the panic from my voice.  “And what exactly am I hiding from?”

His dimples are out in full force.  “Bastards like me.”

Nikki is giving away a SIGNED copy of Silver!