Review Time! Insignia by S.J. Kincaid is a 2012 YA Debut, released in July, this is probably one of my most anticipated debuts of the year. Not only has it already been optioned for film by FOX, the 3-book deal sold for a whooping 6 figures! You can purchase the book at The Nile | Fishpond | Booktopia | Dymocks | The Book Depository. Thanks to 5 Mile Press for the review copy! 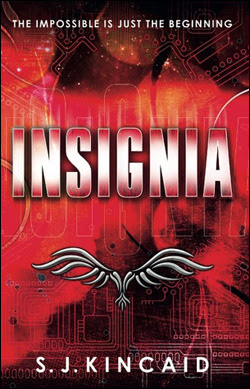 (Goodreads) More than anything, Tom Raines wants to be important, though his shadowy life is anything but that. For years, Tom’s drifted from casino to casino with his unlucky gambler of a dad, gaming for their survival. Keeping a roof over their heads depends on a careful combination of skill, luck, con artistry, and staying invisible.

Then one day, Tom stops being invisible. Someone’s been watching his virtual-reality prowess, and he’s offered the incredible—a place at the Pentagonal Spire, an elite military academy. There, Tom’s instincts for combat will be put to the test, and if he passes, he’ll become a member of the Intrasolar Forces, helping to lead his country to victory in World War Three. Finally, he’ll be someone important: a superhuman war machine with the tech skills that every virtual-reality warrior dreams of. Life at the Spire holds everything that Tom’s always wanted—friends, the possibility of a girlfriend, and a life where his every action matters—but what will it cost him?

The Short Story? - A spectacular debut that will appeal to readers of all ages and genders! Kincaid's Insignia definitely lives up to it's reputation. With excellent world-building, a refreshingly young protagonist and a captivating and exciting plot - there is something in Insignia for everyone. Beautifully written novel with a prose that really makes the story flow, Insignia is a remarkable debut that gives true meaning to YA science fiction!

The Long Story? - I don't often mention books having the "wow-factor" in my reviews because they generally don't. Loving a book and it having "wow-factor" are two very different things. I can safely say that Insignia was one of those books with "wow-factor". Kincaid's debut just completely blew me away! It's one of those books that really stick with you after you finish it, the premise for the novel is just so unique and interesting and creative - I honestly wonder how anyone can come up with a plot like this. The world-building is excellent, it's more science fiction than dystopian but it is a futuristic YA  and the detail Kincaid puts in her description makes everything just so vivid in my mind. It's a very technologically advanced world and I'm mind blown by all these cool gadgets that's she's come up with. In terms of the plot itself, I really enjoyed it. There was action, drama, tension, a little bit of mystery and even some romance. Personally there were parts of the novel that I thought could have been sped up a little but looking at the big picture, it was quite amazing! REALLY AMAZING!

In terms of YA, the protagonist Tom is quite young. That was one of the aspects of the novel I was worried about, I find that while I have no trouble relating to characters of the opposite sex - age sometimes make them hard for me to sympathise with. I completely worried for nothing because I can't even imagine Insignia without Tom now! He was such a boy, the way he thinks, the way he speaks, his action everything just screamed GUY and that was okay! He was refreshingly different from other protagonist I have met through YA fiction. He was loyal, compassionate and a little fearless but he's also ruthless, hot headed and not exactly the best decision maker. I liked his flawed personality and he's daunting past. I just loved how much Tom grew up throughout Insignia. He's matured into a better version of who he started off as and that's what character development is! Very well done!

In a nutshell, I can't recommend this book enough! Insignia definitely has the "wow-factor", even if it's not your type of book - it's still worth checking out because the premise of this debut is just breathtakingly amazing. Kincaid's world-building leaves little to imagination and just brings these vivid images of a technology dominated world. Beautifully written, fanatic protagonist and an enjoyable plot. Insignia will keep you entertained from start to finish!

What's it Worth? - Break out the Piggybank