Review Time! Fated by Alyson Noel marks the start of Alyson's brand new YA series called Soul Seekers. Alyson is the best selling author of the Immortal series as wells the spin-off Riley Blooms series. I wasn't a fan of Noel's Immortal series so I was a little hesitant when starting Fated but it didn't let me down! Thanks to Pan Macmillan for the ARC and finished copy! 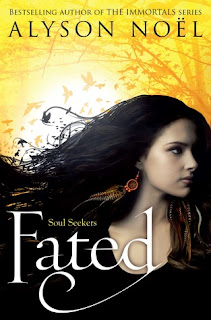 (Goodreads) Strange things are happening to Daire Santos. Crows mock her, glowing people stalk her, time stops without warning, and a beautiful boy with unearthly blue eyes haunts all her dreams. Fearing for her daughter’s sanity, Daire’s mother sends her to live with the grandmother she’s never met. A woman who recognizes the visions for what they truly are—the call to her destiny as a Soul Seeker—one who can navigate the worlds between the living and dead.

There on the dusty plains of Enchantment, New Mexico, Daire sets out to harness her mystical powers. But it’s when she meets Dace, the boy from her dreams, that her whole world is shaken to its core. Now Daire is forced to discover if Dace is the one guy she's meant to be with...or if he’s allied with the enemy she's destined to destroy.

The Short Story? - Fated took me by surprise, I wasn't expecting anything amazing but amazing was what  I got! Noel has combined a supernatural, saving-the-world plot with the cultural shenanigans of the American Indians. It wasn't perfect but it definitely was highly enjoyable. Loved the plot, the characters were very well developed and I very much enjoyed Noel's writing. Fated's got Badass Bookie's tick of approval ;)

The Long Story? - If the Immortal series is putting you off Fated, I can see where you're coming from but there is nothing to worry about. I stopped after reading book 2 of Noel's other YA series but Fated has really got me hooked and I'm eagerly awaiting the next one! The problem when incorporating cultural shenanigans into a novel is that it can sometimes get a little confusing. There were a couple of spots where I was reading words and thinking "okay, WHATTTTTT just happened?" however, those were rare and the plot as a whole was very well done! Started off quite slowly but the build up really suiting the setting and the characters. I loved the ending, very adventurous and enjoyable. Noel's wiring style is very good in Fated, I very much loved the narrative voice! Overall, a very solid start to a new series - I'm impressed!

I really like the characterisation. Lots of character building, especially for the protagonist - Daire. Initially I really wanted to slap some manners into her. She was such a rude girl! I think Noel was trying to play out the whole Hollywood Prima Donna and it was a great touch because it really highlighted the change in personality as Daire embraced her role as a seeker :) Dace was the most adoring guy! He's your typical YA good "guy". ANNNNNND for those girls out there who are possessive of their boys, THERE'S TWO OF THEM! Yes, Dace as a (evil) twin brother called Cade who looks exactly like him! More of them to go around! *High5* Noel! Overall, it was a well thought out characterisation, Daire's grandmother was really cool! :D

Overall, a very well written and refreshingly original YA paranormal! I'm very pleased with Fated and I can't wait where the sequel take's Daire and Dace. Honestly, I was prepared to be disappointed by Fated and yet it's surprised me with it's fantastic characterisation and solid plot. I definitely recommend this novel to readers who loved In the Arms of Stone Angels by Jordan Dane and YA Paranormal in general!


What's it Worth? - Hand Over the Paycheck

Posted by Badass Bookie at 4:45 PM