Debut of the Month - All About Lies Beneath + Giveaway 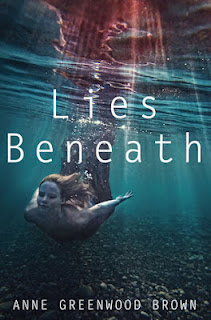 
Calder White lives in the cold, clear waters of Lake Superior, the only brother in a family of murderous mermaids. To survive, Calder and his sisters prey on humans, killing them to absorb their energy. But this summer the underwater clan targets Jason Hancock out of pure revenge. They blame Hancock for their mother's death and have been waiting a long time for him to return to his family's homestead on the lake. Hancock has a fear of water, so to lure him in, Calder sets out to seduce Hancock's daughter, Lily. Easy enough—especially as Calder has lots of practice using his irresistable good looks and charm on ususpecting girls. Only this time Calder screws everything up: he falls for Lily—just as Lily starts to suspect that there's more to the monsters-in-the-lake legends than she ever imagined. And just as his sisters are losing patience with him.

Sometimes it's fun to look behind the curtain to see where a book was before it was a book. They usually don't come out of the chute looking anything like their final version. For example, as I mentioned, my novel was originally titled THE PROMISE, then it became WHAT'S UNDERNEATH, before finally settling on LIES BENEATH. Actually, my husband seriously pushed for it to be called FISH AND CHICKS. (I've kept him around anyway.)

Another change was that my character Maris used to be called Ren. She was Lily's foil. I had to change her name when I was reading another author's book where two major characters were named Ren and Lily! What were the chances??? Oy.

But probably the biggest change was that there was an incarnation of LIES BENEATH written in third person pov, instead of Calder's first person point of view. It started with this Mini Prologue:

On the shores of Lake Superior, just north of Bayfield, Wisconsin, there is a wayside rest with a small cinderblock outhouse, nearly obscured by the underbrush. A message is scrawled on the wall in black permanent marker. People come here to see it. They trace the inscription with their fingers, lay their palms against the wall. They imagine her leaning in as she wrote.

My name is Lily Hancock. I'm telling you this in case you have to identify my body. Tell my parents I'm sorry, but a promise was meant to be kept. Now all I need is luck.


And they wonder if she'll ever be found.

I kind of liked that, but writing the story in third person did not have the same resonance as first person. Here's a glimpse of the moment where Calder meets Mrs. Hancock in an early third-person pov draft:

"Why don't you introduce me to your friend, Lily?" her mother called. She smiled and lifted a hand, coaxing them over to her. As they got closer, Calder suppressed surprise at finding Mrs. Hancock sitting in a wheel chair.

Here is the same moment in Calder's first person point of view:

"How was work, Lily?" Mrs. Hancock called. "Is that Calder, too? Our hero!" She smiled and lifted a hand, coaxing us over to her. As we got closer my pulse raced. I didn't know if it was because Mrs. Hancock was sitting in a wheel chair--Had she been that hurt when fell in the kitchen?--or because there was something about being so close to a mother.  Any mother. Carolyn Hancock's face softened when she looked at me. Or was I imagining that? Was wish fulfillment another symptom of prolonged abstinence? Was I becoming delusional?

Telling the first installment of the LIES BENEATH series from the point of view of cold-blooded merman with guarded speech was a huge risk. How does a reader sympathize with that kind of character? Letting the reader into Calder's mind, showing his most intimate thoughts about love, guilt, and the loss of his family was the only way to make that happen. Hence, the point of view had to change so the reader could watch Calder's evolution from animal to man. I hope you will agree that it was the right decision!

Anne is giving away (2) SIGNED Hardcover Copies of Lies Beneath + Bookmark!