Review Time! Changeling marks Philippa Gregory's YA Debut. Philippa Gregory is the bestselling author of The Other Boleyn Girl and couple of other adult historical fictions. Although I haven't read any of her other novels, I was so psyched to start reading Changeling! Thanks to Simon and Schuster for the review copy! 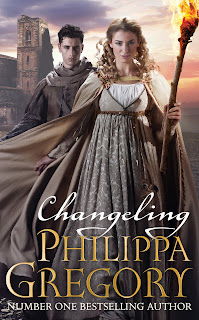 (Goodreads) Italy, 1453. Seventeen-year-old Luca Vero is brilliant, gorgeous—and accused of heresy. Cast out of his religious order for using the new science to question old superstitious beliefs, Luca is recruited into a secret sect: The Order of the Dragon, commissioned by Pope Nicholas V to investigate evil and danger in its many forms, and strange occurrences across Europe, in this year—the end of days.

Isolde is a seventeen-year-old girl shut up in a nunnery so she can’t inherit any of her father’s estate. As the nuns walk in their sleep and see strange visions, Isolde is accused of witchcraft—and Luca is sent to investigate her, but finds himself plotting her escape.

Despite their vows, despite themselves, love grows between Luca and Isolde as they travel across Europe with their faithful companions, Freize and Ishraq. The four young people encounter werewolves, alchemists, witches, and death-dancers as they head toward a real-life historical figure who holds the boundaries of Christendom and the secrets of the Order of the Dragon.

The Short Story? - Changeling is one of those books that you either love or hate because it all comes down to - do you like Historical Fiction? As a lover of historical fiction, Changeling was right down my street! A beautiful historical setting, two very interesting protagonist and an alluring plot filled with mystery. Gregory has written a solid debut and I can't not wait to see what she has planned for us next!

The Long Story? - It's a really short book, 250 pages give or take so there aren't really any pages to spare for batting around the bush. I'm thoroughly impressed with Gregory's ability to set the scene, build characters and develop an intriguing in such few pages! The plot came off as very solid, there was mystery, drama and romance. It's weird because Changeling was like a collection of small plots interweaved into a bigger picture. Luca is an inquirer who goes around Italy solving mysteries and serving justice and in Changeling he solves two mysteries and the novel finished with him heading back no the road to solve he's next mystery. Gregory's debut is definitely different and her writing is very rich and detailed. Highly recommend this to lovers of Historical YA fiction :)

Personally I thought the characterisation let the book down a little. They were really great characters but there were some cases where I though they were too stupid to live. It felt like Gregory deliberating stupidified them to keep the story going. As the novel progressed, this became less frequent until the characters become intelligent cookies, so that was great! Changeling is told from the alternative POVs of Luca and Isolde. Luca and Isolde were good protagonists, I liked how Gregory has given them personalities that fitted with the period of time Changeling was set it. Both characters were level-headed and kind however I think the character l liked the most most was Isolde's best friend - Ishraq. OMG, this girl is totally badass! Educated, too cool and know show to fight! My hero <3 Overall, it was a good cast and I would like to see them all develop in the sequel! :)

All in all, Changeling was a very enjoyable read. Aside from my slight problems with the character at the start, I think Gregory's YA debut is thoroughly enjoyable and definitely very different! If you're fan of historical fiction, Changeling is definitely right down your alleyway! Filled with drama and mystery and the touch of romance, I can't wait to see what the sequels brings! :)