Debut of the Month - All About Claire LaZebnik 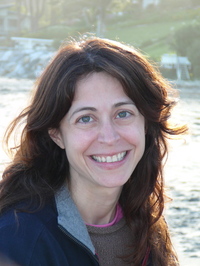 I grew up in Newton, Massachusetts and went to college about twenty minutes from home. I didn't think I'd ever settle down anywhere else. Somehow, though, I just kept moving farther and farther away and one day I realized I'd been living in Los Angeles for pretty much an eternity. I'm not sure when I knew I was never going to end up back on the east coast . . . maybe somewhere around the time my fourth child said, "Mommy? What's a down jacket?" Turns out I was raising me a bunch of California kids.

Anyway, after I moved to LA, I spent some time writing for magazines like VOGUE and COSMOPOLITAN. Back then people used to say skeptically, "YOU write for fashion magazines? YOU?" I rarely put on make-up and I wear old jeans and t-shirts every day--always have, always will, or at least I will until I can't get the jeans on anymore and have to switch to those stretchy old-lady pants. Anyway, I faked the fashion stuff for a while but then I started having kids and couldn't stop so I gave up on the magazine track. Several years later, I found myself with four kids and an itch to write. I scratched the itch, got my first novel published and haven't looked back. Well, maybe I've looked back, but only in a happy, nostalgic, where-did-the-time go? kind of way . . .

Dream Debutante Dress - This picture from the LA Times of a dress by Prabal Gurung has been hanging over my desk for MONTHS now as inspiration, since all my novels have a strong romance element in them--and what's more romantic than a gorgeous red off-the-shoulder dress that looks like it's already been for a quick roll in the hay?  I wish I had a reason to wear this.  And looked like her when I did. 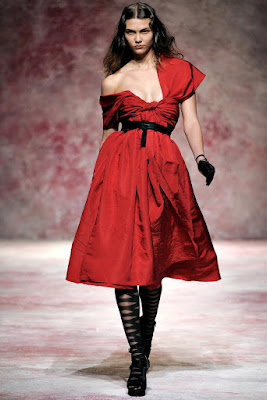 10 facts about me that most people don't know:

1. At 5' 2 1/2", I am the TALLEST one of the four sisters in my family. Growing up, I honestly thought I was amazonian. It took me years to realize I'm actually short. And now three of my four kids are taller than me--hooray!


2. EPIC FAIL is my first YA novel, but it's my 5th novel and 7th published book (I co-authored two books on autism). My 6th novel comes out in less than a month.


3. I love to bake more than pretty much anything else. During the cool winter months, I probably bake every day. My kids like brownies the best, but I love cakes, especially peanut butter pound cake. Nothing wrong with chocolate chip cookies either.


4. One of my sons has an autoimmune disease called Celiac Disease and can't eat any gluten, which is found in regular flour, so I have to bake with gluten-free flours, like rice, tapioca, and cornstarch. It adds an interesting challenge to baking.


5. My daughter also has an autoimmune disease. Hers is called Addison's and it means her adrenal glands don't function. Some scholars believe that Jane Austen (who wrote PRIDE AND PREJUDICE, which EPIC FAIL is loosely based on) died from Addison's Disease, but no one's sure. Fortunately, it's now treatable.


6. My husband is a TV writer who's been working on the animated show THE SIMPSONS for the last several years, which makes him the coolest dad at school, as far as my kids are concerned.


7. I went off to college when I was 16 and graduated when I was 20. I thought that meant I'd always be younger than everyone else I know, but that turned out not to be true.


8. I like to knit but I rarely finish anything. Except scarves. I've finished scarves. I have a beautiful half-made sweater sitting next to my bed that I started to make for my husband something like eight years ago. It'll be really great when I finish it. Too bad I won't ever finish it.


9. I'm a total slug. You want to make me happy? Plunk me down on a sofa surrounded by my entire family, put a bag of pretzel M&Ms in front of us and TOP CHEF or PROJECT RUNWAY on the TV. Bliss.


10. My daughter thinks that the funniest thing that ever happened in our family was when I stepped into a hot tub, lost my footing, and fell face first into the water in front of everyone. She still laughs hysterically whenever she thinks about it. I don't quite see the humor in it myself.

Annnnnnnd that's a wrap for today! Thanks so much for the fantastic post Claire! I love, love, love your dress, the red is just amazing! Project Runway is a great show so I don't think that makes you a slug :) My dad owns a tourism business so he goes to theme parks for a living which make him coolest dad in like, second grade :P I love your ten things about you and can't wait to read more! Lovelies, come back tomorrow for the second half of Claire's feature and an EPIC (pun intended) giveaway!