Review Time! If you’re looking at the cover and wondering what book is this, this is a review of Glow by Amy Kathleen Ryan. The US cover is different (similar to Matched) but the contents are the same :) Thanks to Pan Macmillan for sending me an ARC of the novel! 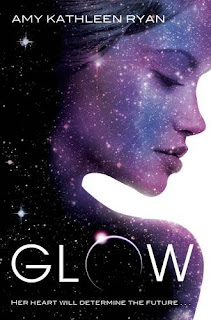 (Goodreads) What if you were bound for a new world, about to pledge your life to someone you'd been promised to since birth, and one unexpected violent attack made survival—not love—the issue?
Fifteen-year-old Waverly is part of the first generation to be successfully conceived in deep space; she was born on the Empyrean, and the large farming vessel is all she knows. Her concerns are those of any teenager—until Kieran Alden proposes to her. The handsome captain-to-be has everything Waverly could ever want in a husband, and with the pressure to start having children, everyone is sure he's the best choice. Except for Waverly, who wants more from life than marriage—and is secretly intrigued by the shy, darkly brilliant Seth.


But when the Empyrean faces sudden attack by their assumed allies, they quickly find out that the enemies aren't all from the outside.

The Short Story? – If Across the Universe by Beth Revis and Wither by Lauren DeStefano had a baby this would be the epic offspring. A thrilling new science fiction that’s going to knock your socks off! Exciting, dark and original. One hell of a page-turner! Strong narrative voice, fantastic characters and a plot that grips onto you and never lets go! A roller-coaster ride!

The Long Story? – Glow is very similar to Across the Universe in many ways. They both set in the future, both on space ships and they both have the same appeal. However at the same time, they’re different (not making sense am I?). I guess what I’m trying to say is that just because you’ve read one doesn’t mean you shouldn’t read the other. I liked Glow better anyway :)

I liked the plot of Glow much better than Across the Universe. The concept is great, it’s much more exciting and unlike Across the Universe, the novel flowed really well. It wasn’t disjointed and it was very clever. Clearly a heap of research was poured into this, unless Amy works for NASA there is no way anyone can have this much knowledge about space travel without countless hours of research. The best thing about the novel was the concept that these kids are trying to save the world. When an attack kills almost all the adults on the ship, it’s up to these kids to keep the ship running because the future (literally) depends on them. It’s also clever for Ryan to separate the girls and boys, it was like two different stories weaved into one epic adventure. These kids are fighting for their lives and the tension and action is so addictive, I was rooted to my seat, unable to move! A fantastic page-turner!

The characterization was really well developed. I can see the start of a love triangle forming and I’m yet to decide which side I’m on because right now, both boys have appeal and flaws. Waverly, our protagonist is someone I admire. In her shoes, I would have just given up but her determination and courage is what kept this book going. She’s really one brave girl. Kieran, our love interest doesn’t have any physical appeal to me :/ however he’s got one of the best personalities I have encountered, he’s got great leadership skills and he’s a great character. Seth who has lots of physical appeal has one of the worst personalities ever (see how I’m torn between the two?) but I can see where he’s coming from and I can see change already in him for the sequel. Minor characters each have their individual appeal but the one thing they share is this courage and determination. One of the best casts I’ve encountered in a long time.

While the plot and the characterization were both really great it was Ryan’s writing that stole the show. One of the best narrative voices I’ve read in a long time. One of the few novels I’ve read that brings raw emotions from the reader. Throughout the novel, my emotions were all over the place, I was angry, sad, happy and annoyed. Glow bought so many emotions out of me and the worst part is that it’s so addictive you can’t even put the book down to calm down!

Glow is an epic and highly original science fiction. Brilliant plot, fantastic characters and one of the best narrative voices I have read in a very long time. The ultimate page-turner, Glow is not to be missed. Thrilling, edgy, dark and addictive one of the best dystopian novels I’ve read this year. For lovers of Across the Universe, this is the next best thing.