Debut of the Month - All About Epic Fail + Giveaway 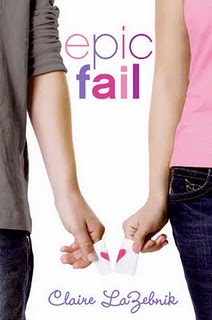 Will Elise’s love life be an epic win or an epic fail?


At Coral Tree Prep in Los Angeles, who your parents are can make or break you. Case in point:


As the son of Hollywood royalty, Derek Edwards is pretty much prince of the school—not that he deigns to acknowledge many of his loyal subjects.


As the daughter of the new principal, Elise Benton isn’t exactly on everyone’s must-sit-next-to-at-lunch list.


When Elise’s beautiful sister catches the eye of the prince’s best friend, Elise gets to spend a lot of time with Derek, making her the envy of every girl on campus. Except she refuses to fall for any of his rare smiles and instead warms up to his enemy, the surprisingly charming social outcast Webster Grant. But in this hilarious tale of fitting in and flirting, not all snubs are undeserved, not all celebrity brats are bratty, and pride and prejudice can get in the way of true love for only so long.

One of my favorite movies of all time is Amy Heckerling's CLUELESS, which is a modernization of Jane Austen's EMMA, but such a brilliant, subtle, and approachable adaptation that you don't need to have read a word of Austen to appreciate it. I felt like no one had done that yet with PRIDE AND PREJUDICE--turned it into a fun high school romance. I'd been wanting to break into the YA market, so I figured I'd try my hand at it, see if I could get it to work.


It was instantly clear to me that I had to solve one very thorny problem before I could move ahead: we just don't have the same kind of class distinctions in the U.S. today that they had back in Austen's era in England. And without those distinctions, the Darcy character goes from being understandably proud to just being an unpleasant jerk. How could I successfully bring some kind of believable class system into a 21st century high school?

I fretted over this for a while--and then it came to me: we may not have lords and ladies and "the landed gentry" and all that, but we Americans love our celebrities. We worship and fawn on them and scheme to get closer to them. It was a true ah-ha! moment. Mr. Darcy became Derek Edwards, son of not one but TWO Hollywood movie stars, and suddenly his wariness toward other people made a lot of sense. Since I live on the westside of LA, I actually walk by a bunch of celebrity houses all the time. I've literally seen paparazzi camped out on the street and let me tell you: that kind of stalking would make anyone shut down and only trust people he'd known all his life.


So I had my Mr. Darcy. After that, everything else fell into place. I tried to think of a new way for the girls to be continually embarrassed by their mother, and I think I found something pretty good for that too, but I'm not going to spoil the surprise here. And of course I had to update the story to include texting, loud parties, worries about college, and teachers who think they're too cool for school. But some things didn't have to be updated: sisters will always drive you crazy AND be more loyal to you than everyone else. And sometimes love sneaks in where you least expect it. I didn't have to change any of that.

Anyway, one very cute cover design later . . . and EPIC FAIL was a book.

Claire has kindly offered (5) FIVE finished paperback copies of Epic Fail to you lucky winners! Unfortunately this giveaway is only open to US residents! ( So sorry! Interntional giveaway in two days!) Commenting is required because comments make me and Claire and everyone happy! :) Please read rules of entry below :)